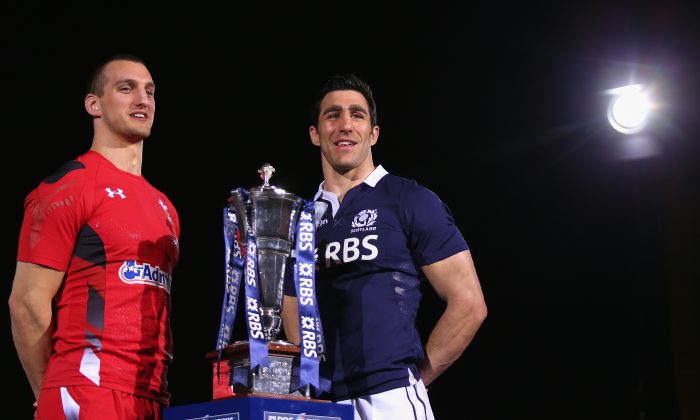 Captains Sam Warburton of Wales and Kelly Brown of Scotland pose for a photo during the RBS Six Nations Launch at The Hurlingham Club on January 22, 2014 in London, England. (Bryn Lennon/Getty Images)
Sports

Wales vs Scotland is one of the sixth round rugby matches in the Six Nations tournament.

Millennium Stadium in Cardiff is the host of the match.

It will be broadcast on BBC One in the United Kingdom. A live stream is available on BBC iPlayer.

Neither team has a chance to secure the championship title so they are playing for pride.

Wales has gone 2-2 in the tournament while Scotland is 1-3.

Wales head coach Warren Gatland said in an interview posted on the tournament website that “Saturday is an opportunity for us to put in a performance we know we can and finish the Six Nations on a high.”

“We’ve made a number of changes and freshened things up with a just a six-day turnaround between matches,” he said.

“Scotland will come looking to play some rugby and had a morale boosting win against Italy and were unlucky to lose against France in recent weeks.”

“It’s not about me. I did it for what I feel is the right fit for Scotland and I’ll take up a different role and I’ll enjoy that – but I’m really proud to say I’ve been a part of it,” he said.

He also said that Edinburgh winger Dougie Fife will debut after injuries to Sean Lamont and Tommy Seymour. Max Evans will start on the other wing.

“We like Dougie’s size and his competitive edge. He chases everything, which I like, and he has shown really good glimpses playing for Edinburgh this season,” said Johnson.

“He’s been ear-marked by us for a while – we’ve been following him for the last 12 months – and he’s got his reward now. If he gets this one right, you might find that he puts a bit of pressure on (for a place) going forward, which is really good.

“I don’t really think Saturday will faze Dougie. He’s one of those players where it doesn’t seem to matter who he marks he just goes out and plays the same.”