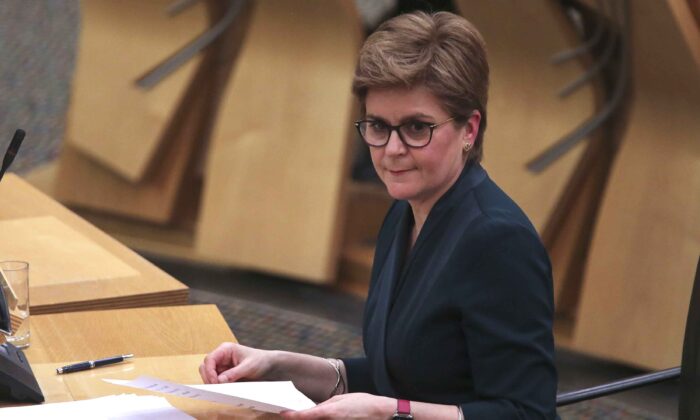 Scotland’s work from home guidance will be ditched next week in favour of hybrid working as COVID-19 cases continue to fall, First Minister Nicola Sturgeon has announced.

The current guidance on working from home was strengthened after the emergence of the Omicron variant of the CCP (Chinese Communist Party) virus.

In England, the Conservative government already lifted the work from home guidance on Jan. 19.

Addressing the Scottish Parliament in Edinburgh on Jan. 25, Sturgeon said the guidance can now be updated as a result of the “significantly improved situation.”

She said: “Instead of recommending home working whenever practical, the new guidance will pave the way for a phased return to the office.”

Under the new guidance, which will come into effect on Jan. 31, employers should consider implementing hybrid working, with workers “spending some time in the office and some time at home,” said the first minister.

But she added the change is not expected to spark a “wholesale return to the office next week,” as a “mass return” is “likely to set progress back.”

Business groups have welcomed the decision. The Scottish Retail Consortium (SRC) said the move will provide a boost to city and town centre businesses, which “have been especially hard hit by the exodus of office workers, civil servants, students, and tourists during the pandemic.”

The Scottish chapter of the Confederation of British Industry (CBI) said: “There are also many clear benefits to being in a physical workspace, such as collaboration, on-the-job learning, and reducing the negative impact of isolation on mental wellbeing.”

But some other measures brought in to slow the spread of Omicron remain in place, such as the requirement for face coverings to be worn by staff and pupils in secondary schools.

Scottish Conservative leader Douglas Ross, who has repeatedly pushed for the rules to be relaxed, again urged the first minister to change the guidance on masks in schools.

“Right now, adults can sit in workplaces and pubs without face masks, but pupils in the classroom are still required to wear them,” he said.

Sturgeon said the government is not recommending any changes “at this stage,” but said it is “being kept under close and regular review.”

Daniel Wyatt, the rector of Kelvinside Academy in Glasgow, described the level of restrictions in schools as “farcical.”

“Nightclubs are open and 50,000 people can go to watch sport, yet restrictions on pupils remain. The impact on pupils’ development and mental health could be catastrophic,” he said after the First Minister’s statement.