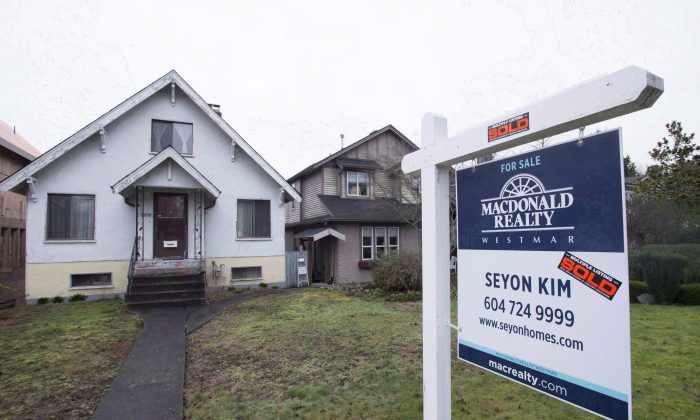 A sold home in Vancouver on Feb. 11, 2016. The presence of foreign money is changing the landscape in Vancouver’s and Toronto’s housing markets. (The Canadian Press/Jonathan Hayward)
Business & Economy

As prices keep climbing beyond the growth of incomes, the Canadian economy becomes more vulnerable to a jump in unemployment, interest rates rising, or foreign capital leaving. Such triggers could ignite an even bigger economic meltdown.

The Canadian Real Estate Board (CREA) reported on May 16 the staggering April year-over-year home price increases in Greater Toronto (up 12.6 percent) and especially Greater Vancouver (up 25.3 percent).

Supply is disappearing in Vancouver and Toronto.

CREA chief economist Gregory Klump said people are becoming reluctant to sell their homes and then competing to buy a home. “As a result, many homeowners are deciding to stay put and continue accumulating capital gains. That’s keeping listings off the markets at a time when they are already in short supply,” said Klump in a statement.

The sales-to-new listing ratio for Vancouver is 83 percent and for Toronto it is 75 percent. A ratio between 40 percent and 60 percent represents a balance between buyers and sellers.

The government’s latest measure to cool off Vancouver and Toronto housing markets— increase downpayments for homes priced between $500K and $1 million—met with scepticism when it was announced last December. BMO senior economist Sal Guatieri, among others, said it has made little difference since coming into effect earlier this year.

“We’re seeing a record amount of money leaving China in the past year, so that seems to be what’s changed,” Guatieri said. Other factors supporting housing demand such as low interest rates and millennial homebuyers have existed for many years now.

Guatieri explained how Vancouver and Toronto are so-called gateway cities, which are particularly attractive to foreign buyers. Cities like Sydney and Melbourne in Australia; Auckland, New Zealand; and London, England face similar issues caused by inflows of foreign wealth.

“There is a clear sense of urgency among many Chinese residents to send money out of the country, given the risk of a large-scale devaluation of the yuan,” said CIBC deputy chief economist Benjamin Tal in a report.

Recently enacted initiatives to collect and analyze data on the amount of foreign wealth coming to Canada will take time. Thus, it is hard to see further policy action any time soon, says Guatieri.

“It’s not something we’ve seen in the past,” said Tal about the foreign inflows.

“We don’t have good statistics. Yes, clearly China is the main story but there’s more than that. There has to be; there’s European money absolutely,” Tal said.

Tal also said that foreign investment from China could pick up. A pilot program that allows wealthy individuals to invest half their assets internationally is being tested in Shanghai.

“What appears to have changed as well, almost in a vicious cycle, is we’re seeing increased speculation,” Guatieri said—especially about Vancouver’s condo market.

Guatieri believes speculation, or “flipping,” has taken off in the last six months.

At this stage, Tal says applying a “flipping” tax on foreign investors could help. “It might be an effective way to remove the most problematic element of foreign investment in Canadian real estate,” he said in his note.

“We continue to believe that the most likely scenario for 2017 is a gradual cooling of activity and moderation of price increases amid rising interest rates and stretched affordability in key markets,” according to a May 16 RBC note.

In its Housing Outlook released May 18, Canada Mortgage and Housing Corp. (CMHC) cautiously pushed back its call for a cooling off in Toronto and Vancouver. It said price growth “may slow” in Ontario and B.C. “given heightened evidence of overvaluation in their markets.”

The national housing agency said it expects interest rates to rise gradually in the first half of 2017. And as more listings are added and sales taper off, more balanced conditions are expected to return.

But unless foreign inflows are blunted, it’s difficult to see housing markets in Vancouver and Toronto cooling off.

“With supply in the two hot markets extremely tight, and policymakers barely testing the water, prices are likely to push even higher through the rest of this year,” said BMO senior economist Robert Kavcic in a May 16 report.

“That [foreign] money is finding a home being parked in one of the hardest assets, and that’s real estate,” Guatieri said. “I don’t see anything stemming that influx, don’t see that cooling in the next year.”

“We don’t see anything stopping the frothiness in Vancouver and Toronto.”

It’s a basic lesson in supply and demand.