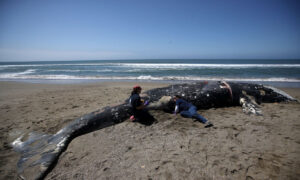 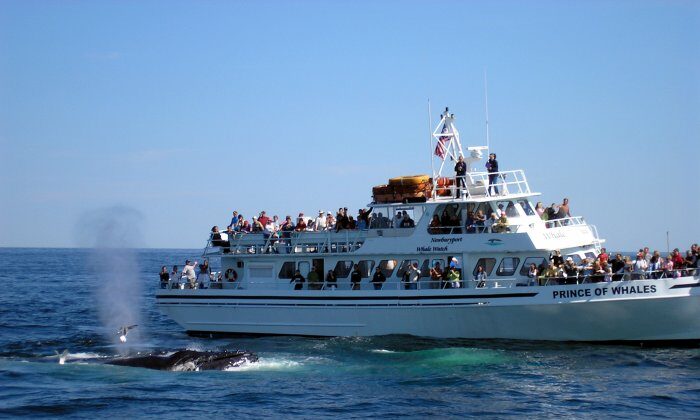 Scientists at the Marine Science Institute, University of California–Santa Barbara estimate that more than 80 fin, blue, and humpback whales on the West Coast succumb to vessel collisions annually. (Courtesy of the International Whaling Association)
Southern California

NEWPORT BEACH, Calif.—Scientists, researchers, and environmentalists have long grappled with how best to analyze the occurrence of vessel strikes that kill or injure endangered whales and other marine mammals along the feeding ground waterways of the California coast.

In Huntington Beach, a 63-foot fin whale washed onto California shores on May 19, after it was struck by an Australian Navy ship on its way to San Diego. Such occurrences are the only way researchers know when an animal has died.

That vessel strike left two animals dead, including the one towed to sea in San Diego, which later washed up on Bolsa Chica State Beach, and a calf, which was buried on land.

Kevin Pearsall of California State Parks and Recreation confirmed to the Epoch Times that the whale carcass was removed on May 22 and hauled to Miramar Landfill in San Diego by a private contractor hired by state parks.

Pearsall said that the $10,000 disposal fee normally charged by the landfill was waived, likely due to the fact that it’s on leased land owned by the U.S. Navy. The Australian Navy vessel that struck the two whales was conducting training maneuvers with the U.S. Navy, and the deceased whales were only detected when the ships arrived in the Port of San Diego.

It’s not clear yet who will be responsible for the remaining costs associated with the incident, which Pearsall said could amount to as much as an additional $15,000.

Bolsa Chica State Beach is one of the most visited beaches in the state, Pearsall said, and there had been at least 40 to 50 people per day coming to the beach to view the animal. However, on May 22, crowds dissipated for the entire four hours it took crews to complete the unpleasant task of dismantling and removing the whale.

“There’s just no ‘right’ or easy way to deal with the death of a mammal that size. Everyone did the best job under the circumstances,” Pearsall said. “I really appreciate that people stayed away, it almost seemed out of respect, while the team worked to dispose of what was left of her.”

Fin, humpback, and gray whales are the most vulnerable to vessel strikes due to their migration and feeding patterns along the Santa Barbara Channel near the Ports of Los Angeles and Long Beach.

According to the National Oceanic and Atmospheric Administration (NOAA), commercial whalers had aggressively hunted whales in previous decades, severely lowering their populations to the point of being endangered. Whaling is no longer a threat thanks to protective legislation, and vessel strikes are now the biggest concern.

All whales, dolphins, and porpoises belong to a group of marine mammals called cetaceans. NOAA fisheries work to ensure the conservation of all cetaceans, which are protected under the Marine Mammal Protection Act. The organization works under the Endangered Species Act to protect and recover species such as the fin whale population.

“I would note that several of the protected whale species on the West Coast have increased in number in the last few decades as they have continued rebounding from the depressed numbers from the whaling era,” he said.

Scientists at the Marine Science Institute, University of California–Santa Barbara estimate that more than 80 fin, blue, and humpback whales on the West Coast succumb to vessel collisions annually.

But the true numbers aren’t really known, because often a vessel’s crew isn’t aware that it has hit an animal, or the incidents aren’t reported.

Milstein said NOAA Fisheries have worked extensively with John Calambokidis, a research biologist with Cascadia Research Collective in Washington State, who’s known as one of the top experts on whales on the West Coast. He has studied ship strikes on whales and other species.

The Epoch Times asked Calambokidis how broad the vessel strike issue is today.

“I would say it’s absolutely a global problem, and that in general, the U.S. has been leading some of the conservation efforts, particularly in the Atlantic,” Calambokidis said.

“To Michael’s [Milstein] point, certainly within whale populations, we have seen major recoveries and increasing numbers of both fin and humpback species, but we’ve learned also there are more whales to be struck. As their population number increases then, statistically, the number of accidents will increase, but is there a correlation.

“One of the big challenges is that only a very small proportion of the ship strikes that we are fairly certain are occurring get documented.”

Calambokidis said the number of documented ship strikes isn’t the best way to analyze the situation. He estimated that as much as 90 percent of fin, blue, and humpback whale mortality goes undocumented.

“You know, I just try to remind people that we don’t really have accurate indicators,” Calambokidis said. “Analysis of those strikes that are documented may seem like it’s the tip of the iceberg, but it’s not, it’s far worse than that.

“When dead whales end up on our shores, it focuses our attention on the issue when it occurs and is seen, but the issue is present every year, even when it’s not necessarily getting documented.”