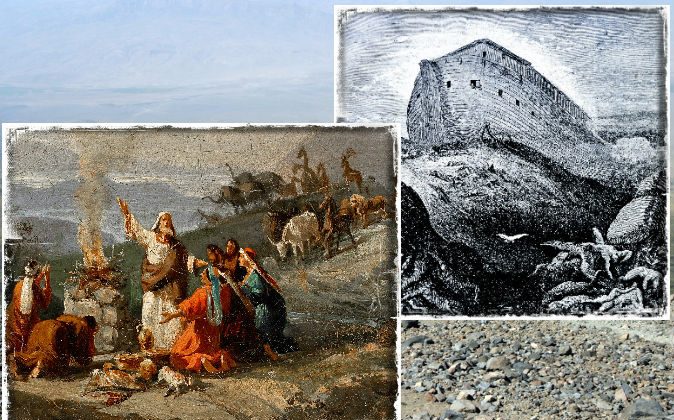 Left: Noah giving thanks for surviving the flood, painted by Domenico Morelli in 1901. (Wikimedia Commons) Right: An engraving of Noah’s Ark (Shutterstock*) Background: Mount Agri (Ararat), the highest mountain in Turkey, is where some say Noah’s Ark may be found. (Shutterstock*)
archaeology

Scientists at the Penn Museum in Philadelphia have re-discovered a rare and important find in their storage rooms – a complete human skeleton who lived around 6,500 years ago in the Sumerian city-state of Ur.  The aptly named ‘Noah’ was originally found within a layer of deep silt, indicating that he lived after an epic flood. The first known recorded story of a great flood comes from Sumer, now southern Iraq, and it is generally believed to be the historic precursor of the Biblical flood story written millennia later.

The skeleton belongs to a middle-aged man, who had been stored in a coffin-like box for 85 years, all trace of its identifying documentation gone. However, a recent project run by the archaeology museum in Philadelphia to digitize old records brought that documentation, and the history of the skeleton, back to light, allowing the skeleton to be properly identified, and its significance realised, for the first time.

According to a news report in Past Horizons, the skeleton was originally found by British archaeologist Sir Leonard Woolley around 1929/1930 during a joint Penn Museum/British Museum excavation of the ancient city of Ur, near modern-day Nasiriyah in Iraq.

The skeleton was located at an incredible depth of 50 feet, in a deep silt layer beneath the city’s 4,500-year-old royal cemetery.  Testing revealed that the layer was 2,000 years older than the cemetery, dating back to the Ubaid period (c. 5,500 to 4,000 BC). A total of 48 human remains were found in the layer, but ‘Noah’ was the only skeleton in good enough condition to be removed. In fact, Noah is the only complete skeleton ever recovered from this region and era.

Sir Leonard Woolley referred to the layer of silt, which was ten-feet thick in some places, as the ‘flood layer’, because, around 40 feet down, it reached a layer of clean, water-lain silt.  Noah is known to have survived or lived after the flood as he was buried in its silt deposits. Woolley determined that the original site of Ur had been a small island in a surrounding marsh.  Then a great flood covered the land in the Ubaid-era.

People continued to live and flourish at Ur, but many scholars believe it was this flood that was written about in the ancient Sumerian cuneiform tablets and retold by many cultures around the world. Some also believe it was the Sumerian account that later inspired the Biblical story of Noah’s Ark.

*Images of Noah’s Ark and Mount Agri via Shutterstock