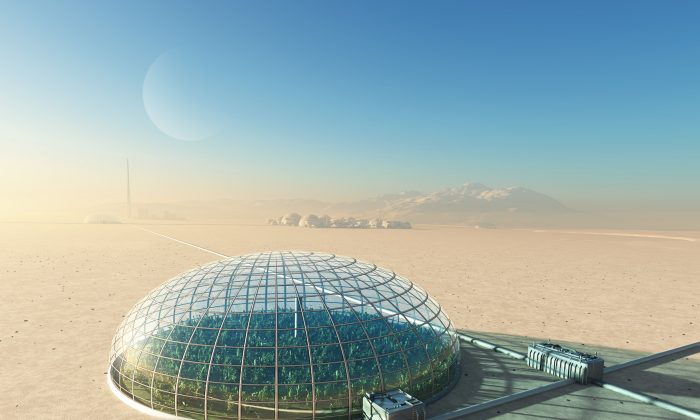 In the new movie The Martian, botanist Mark Watney (played by Matt Damon) is stranded on Mars. The only way to survive is to figure out how to grow potatoes on the freeze-dried planet.

In a prototype greenhouse at the University of Arizona, a team of scientists also is figuring out how to grow food in less-than-ideal conditions. So far they’ve grown sweet potatoes and strawberries using hydroponics. The greenhouse, a plastic-covered cylinder, is called the Controlled Environment Agriculture Center (CEAC).

Gene Giacomelli, horticultural engineer and and director of the CEAC, who saw the movie and read the book by Andy Weir on which the film is based, says it was phenomenal to hear the challenges that Watney had growing his crops. “We had the exact same challenges.”

Funded by NASA, the project brings together some 20 researchers from different disciplines to grow crops that could survive on Mars and the moon.

“This (lunar and Martian) greenhouse is being supported by NASA so that someday people will live and work on another planet. When they do, they need food,” Giacomelli adds.

The hydroponics system and controlled-environment greenhouse provide yields 10 times those in an open field, so the notion of feeding a crew of astronauts for hundreds of sols—Martian days, spanning 24 hours and 39 minutes—isn’t just important for space travel. The team can apply the results to address issues on Earth, such as global food security.

As a controlled environment, the greenhouse is computer automated to provide the optimum air temperature, humidity, water, light, and nutrients.

Why Going to Mars Isn’t Such a Crazy Idea

“We have a wide array of sensors that monitor all of the environmental conditions in there,” says Erica Hernandez, a NASA Space Grant intern and an undergraduate student in plant sciences. “We have a controller that we can program and make changes to the day-to-day routine that the plants experience, and just being able to collect all of that data and really understand the behavior of the system through that data is very interesting for me.”

And because all materials are known and controlled, consumers of the food don’t have to worry about unexpected disease or food-borne illness pathogens.