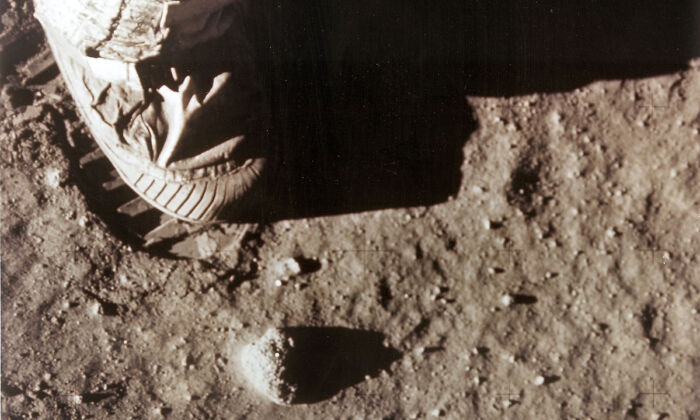 Apollo 11 commander Neil Armstrong's right foot leaves a footprint in the lunar soil on 20 July, 1969, as he and Edwin "Buzz" Aldrin become the first men to set foot on the surface of the moon. Lunar soil brought back to Earth by the mission has b been used to grow plants. (NASA/AFP via Getty Images)
Science

Researchers have grown plants in the soil of the Moon, according to a recent report from NASA.

The study not only can help scientists better overcome food scarcity here on Earth, but it can also help them develop food sources for future humans living or traveling in space.

Lunar “soil” is not the same as the soil on Earth.

It is actually a layer of unconsolidated debris called regolith and is comprised of a complex mixture of five basic ingredients: crystalline rock fragments, mineral fragments, breccias, agglutinates, and glasses.

The thickness of it varies from about 15 feet on the surface of lunar mares, which are the dark spots on the Moon from our perspective here on Earth, to about 30 feet on the Moon’s highland surfaces.

During the Apollo 11, 12, and 17 missions, NASA astronauts collected samples of regolith for use in future studies such as this one, which is part of the Apollo Next Generation Sample Analysis Program, or ANGSA.

For the experiment, researchers chose the plant Arabidopsis thaliana for a few reasons. It grows quickly, has a large number of offspring, and has a relatively small, known nuclear genome, making it easy to study.

It is a member of the mustard (Brassicaceae) family, which includes cultivated species of cabbage and radish. It is also a relative of other cruciferous vegetables like broccoli, cauliflower, and Brussels sprouts. Despite these family relations, Arabidopsis is still largely considered a weed.

However, since ancient times, humans have turned weeds into crops. And since scientists have sequenced the Arabidopsis genome, it is an excellent candidate for the practice.

The fact that scientists have been able to grow it in samples of the Moon’s regolith, then, has implications that could benefit future Moon colonists or visitors.

In this new study, the researchers allotted one gram of regolith for each Arabidopsis plant. They added water and seeds to the samples. Then, they placed the trays into terrarium boxes in a cleanroom. A nutrient solution was added daily.

Between 48 and 60 hours after planting, seeds began to sprout in all of the samples, exhibiting normal stems and cotyledons, or embryonic leaves. The plants continued to grow up until about day six, when it started to become clear that the plants were not as robust as the control group samples, which were planted in volcanic ash.

The plants growing in the regolith were growing more slowly and had stunted and thinned roots and leaves. Also, the stunted leaves took longer to expand, were smaller in diameter over time, and showed signs of a reddish pigmentation.

After 20 days, the scientists harvested the plants before they began to flower and ground them up to sequence their RNA. This revealed that the Arabidopsis plants were reacting differently to each of the three regolith samples collected from the Moon.

Additionally, the RNA sequencing revealed that the plants were stressed in a way similar to when they are grown in other harsh soils, such as those with too much salt or particular metals, indicating regolith is not necessarily an ideal soil to grow such plants.

However, NASA points out that this research opens the door to helping us understand how to perhaps improve the nature of regolith in a way that would benefit future travelers to the Moon.

Understanding which genes plants need to adjust to grow in regolith and what regions of the Moon might be more conducive to such growth are areas the research team hopes to study next.

“Plants are what enable us to be explorers,” according to Sharmila Bhattacharya, program scientist with NASA’s Biological and Physical Sciences (BPS) Division. However, plants are not the only resource the Moon might be able to provide to future space explorers.

Another resource is water, which is why NASA and other global space agencies are sending missions to the Moon’s southern pole.

Using data from NASA’s Moon Mineralogy Mapper instrument, scientists have been able to identify three specific signatures that definitively prove there is water ice at the surface of the Moon.

At the Moon’s south pole, water ice is concentrated in lunar craters, making it a good location to study.

Water ice not only could be key to supporting organic life on the Moon, but it could also be used for propulsion of spacecraft.

This latest experiment resulting in the successful growth of Arabidopsis plants in regolith adds to our understanding of the Moon’s potential as a resource provider.

As Jacob Bleacher, the Chief Exploration Scientist supporting the Artemis program at NASA Headquarters in Washington, D.C., put it, “To explore further and to learn about the solar system we live in, we need to take advantage of what’s on the Moon, so we don’t have to take all of it with us.”