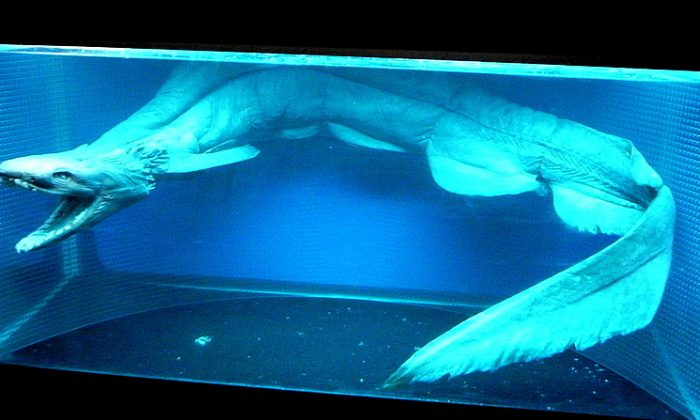 Scientists studying seal life, off the coast of Portugal, have caught a prehistoric shark with 300 teeth.

The six-foot-long frilled shark has existed in its current form for 80 million years, making it one of the oldest species alive today.

Its body shape and the number of gills are similar to fossils of sharks which lived 350 million years ago.

Scientists from the Institute for the Sea and Atmosphere were working on a project to eliminate “by-catch”—unwanted fish dragged up and often inadvertently killed by commercial fisherman trawling for food fish—when they caught this living fossil fish, the Daily Mail reports.

The shark gets its name from the six frilly gill-slits which extend across its entire throat. (Most sharks have an individual opening on the sides of their throats.)

The shark’s most distinctive characteristic, though, is its 25 rows of needle-like teeth, according to Newsweek. The teeth latch securely onto prey, which is hard to find at those depths—so the shark can’t let a potential meal escape.

Those teeth are useless for chewing, they’re only for grabbing. The shark’s jaws are flexible, so once it grabs a meal, the shark can swallow it whole.

The shark feeds on primarily on cephalopods—squids and octopi—but also eats fish and even other sharks.

No one has ever seen a frilled shark feeding, but scientists at the ReefQuest Center for Shark Research hypothesize that based on the shape and location of its fins, the frilled shark might hang motionless in the water, then strike swiftly like a snake when prey comes in range.

The slender, snake-like sharks live at depths of 160–4,200 feet, though one was caught at over 5,000 feet. They rarely come to the surface. Most specimens are pulled up in the nets of commercial fishermen.

Russian fisherman Roman Fedortsov posted this photo of a frilled shark dredged up by his boat on Oct. 31, 2016. The multiple rows of teeth are clearly visible.

The specie’s range is wide, stretching across the Atlantic from Norway to Brazil as well as throughout the Indian and Pacific oceans around Japan, Australia and New Zealand, and as far north as California. But because it lives at such great depths, the species wasn’t even discovered until 1880, by German ichthyologist Ludwig Döderlein, who was exploring around Japan.

The frilled shark is considered to be a “living fossil,” because it has not evolved since the days of the dinosaurs. The same frilled shark shown here could have been seen swimming in the Cretaceous-Period oceans while Tyrannosaurus Rex walked the land.