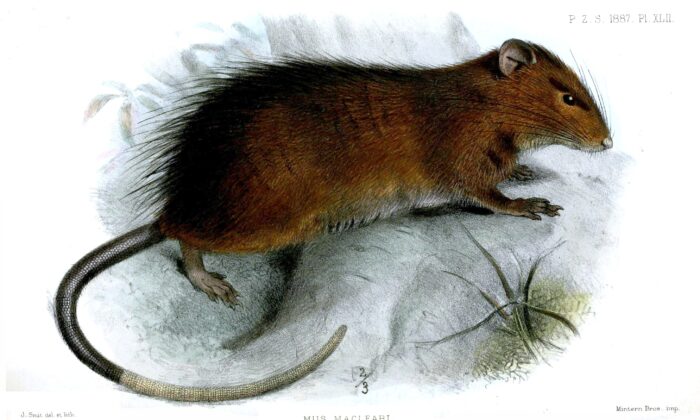 Australia’s extinct Christmas Island rat is the subject of a scientist’s exploration into the possibility of and ethics behind de-extinction.

Tom Gilbert, an evolutionary geneticist at the University of Copenhagen (UCPH) in Denmark, is attempting to reconstruct the extinct Christmas Island rat otherwise known as Maclear’s rat.

The Christmas Island rat has been extinct since 1903. The Aussie marsupial was wiped out by deadly diseases introduced to its home by the European black rats that were brought to the island by British explorers in 1886.

Gilbert in a UCPH media release on March 9 said that Maclear’s rat is a good candidate for de-extinction because it went extinct only 119 years ago so its genome has not largely diverged from modern rat species.

“To bring something back by genome editing, you find the closest living relative, and that is the animal alive today with the genome that is most similar to the extinct one. This requires the fewest edits,” said Gilbert in an email to the Epoch Times. “The further back in time they diverged from each other, the more differences they will have evolved.”

Thus far scientists working on de-extinction have mainly focused on animals that died out earlier than Maclear’s rat such as the woolly mammoth.

Reconstructions of earlier animals are less accurate to the original animal because a larger portion of the extinct animals’ genome cannot be identified. The modern genome of an extinct animal’s closest living relative is used to interpret the older genome and if it has significantly evolved away from the extinct creatures then large chunks of the genome will remain unidentifiable.

“If we try and use the genome of more and more distantly related species to get back the extinct species genome sequence, we miss more and more information,” said Gilbert.

He said that a full intact book is like a modern living species genome, a lot about it can be deciphered, even if the book was put through a shredder, with enough time it could be deciphered by going through all of the book pieces.

“One thing you could do is take all the fragments and compare them to a 20th century version of the book that you can understand,” said Gilbert. “A lot of the fragments will match. But some won’t…as parts of the language have changed too much in 500 years.”

“This is essentially our point. DNA changes, in some parts of the genome fast, other parts slower,” he said.

“When we take our crappy fragmented Christmas rat sequence and compare to a modern sequence…about 95% of the sequences we can identify as they are still similar-ish to the modern rat. But 5% have changed too much to be identified.”

Although five percent of the Christmas Island rat’s genome cannot be identified, 95 percent has been determined through sequencing and comparing the extinct rat’s DNA with a Norway brown rat’s genome.

In theory, the partially identified genome could be used to manufacture a hybrid of the extinct rat. Scientists could hypothetically use CRISPR technology to edit the living species’ DNA to match that of the extinct creature, which is a significant scientific development.

According to Yourgenome.org, CRISPR technology consists of two molecules, an enzyme called Cas9 and a piece of RNA called guide RNA or gRNA—RNA delivers messages from DNA to a cell’s protein-making factories.

The enzyme acts like a scissor, cutting the two strands of a DNA helix at a specific location in the genome so that DNA can be removed or added. The RNA sequence acts as a map for the enzyme, instructing it on where to make its cut.

Once the enzyme makes a cut the cell recognizes that it has been damaged and attempts to repair the cut, allowing for scientists to use the cell’s DNA repair machinery to introduce mutations to that region of the genome.

Although this study communicates a large scientific development, it also strengthens the ethical argument against the process of de-extinction. The study proves that the animals manufactured through this process cannot fully be the extinct animal they are meant to be.

Gilbert said that the genome sequencers that cannot be recognized cluster in regions of the genome that are probably important, like the region responsible for a creature’s sense of smell.

“And given that at Center for Evolutionary Hologenomics we believe that the genome shapes the microbiome and that the microbiome shapes how things live, it leads me to question what effect this missing genetic information might have on the microbiome of the animal,” said Gilbert in the UCPH media release.

In the email to the Epoch Times Gilbert said that the aim of his work is not to re-establish the Maclear rat population in Christmas Island but to explore whether the extinct rat could be reconstructed through gene editing.

“If it was released, given it won’t be a perfect match to the lost form, my guess is it will die quickly as its biologically screwed up. And certainly not have the right microbiome which is key for survival,” he said.

Gilbert said that the choice between spending money to try and bring an extinct animal back and spending money to save currently endangered animals is a ‘no brainer’. He said that the process of de-extinction cannot produce a 100 percent replica of an extinct creature and therefore the replica cannot function as the lost one, so focusing on saving currently endangered animals is the better choice.

“Of course, the reality is that money doesn’t work like that,” said Gilbert. “Some rich philanthropist wants to only support de-extinction…then great. I’m all for people trying. But our message is…you won’t get exactly what you hope to get.”

Meanwhile, the Maclear’s rat is not the only Aussie marsupial currently up for de-extinction.

In Melbourne, Australia, scientists are trying to bring back a Tasmanian tiger population and are building a $5 million genetic restoration lab.

Prof. Andrew Pask, from the School of BioSciences at the University of Melbourne has said that of all the species proposed for de-extinction, the thylacine has one of the most compelling case.

This is because the Tasmanian habitat has remained largely unchanged, providing the perfect environment to re-introduce the thylacine, Pask argued.