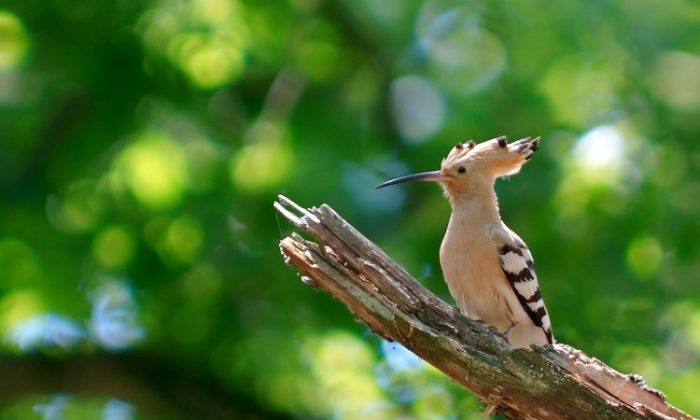 U. epops has a distinctive crown of feathers that matches its powerful wings. (Luc Viatour/www.Lucnix.be)
Science

SCIENCE IN PICS: The Hoopoe

The hoopoe, Upupa epops, is a bird needing no introduction. With a call that sounds like “hoop-hoop-hoop,” it practically sings its own name.

The bird, with a distinctive crown of feathers capping its head, can be found in grasslands and glades throughout Europe, Asia, and Africa.

The hoopoe has powerful wings and is an elusive flier. While in flight, it closes its wings halfway at the end of each beat, looking like a butterfly.

On the ground, the bird has a penchant for sunbathing by fanning out its wings and tail, and tilting up its head. They busy themselves by pecking at the soil for insects with their long, slender beaks.

Hoopoes are territorial creatures and can be aggressive. Males will often fight others, even stabbing their rivals with their beaks and blinding them.

The birds are well-equipped to defend themselves against potential attacks. To deter predators, mothers and nestlings secrete a liquid that smells like rotting meat and rub it into their feathers.

Chicks as young as six days old are also known to defend their nests by launching fecal matter at intruders and hissing like snakes.