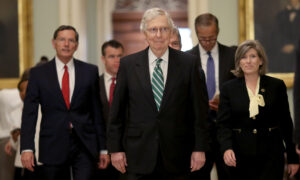 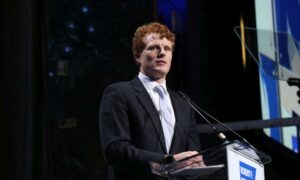 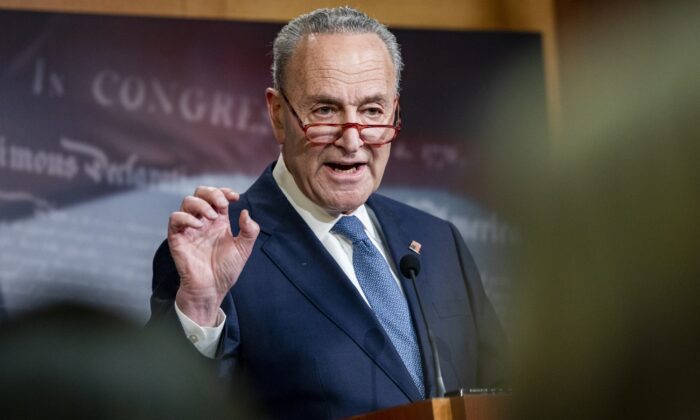 Schumer Renews Call for Witnesses to Testify in Impeachment Trial

Senate Minority Leader Chuck Schumer (D-N.Y.) renewed calls for witnesses in the Senate’s pending impeachment trial following the publication of a report that claimed to detail how aid was frozen to Ukraine.

“This new story” published by The New York Times “shows all four witnesses we Senate Democrats have requested—Mick Mulvaney, John Bolton, Michael Duffey, and Robert Blair—were intimately involved and had direct knowledge of President Trump’s decision to cut off aid in order to benefit himself,” Schumer said on Monday in New York.

The NY Times reported on emails detailing how White House members, including Mulvaney and Blair, were involved in delaying $400 million in security aid to Ukraine for as long as 84 days.

“And when you combine these new revelations with the explosive emails from Michael Duffey released last weekend, it makes the strongest case yet for a Senate trial to include the witnesses and documents we have requested,” Schumer said. He was making reference to the NY Times reporting of emails that showed Duffey, an Office of Management and Budget official, told the Department of Defense to withhold the aid hours after President Donald Trump had a phone call with Ukrainian President Volodymyr Zelensky on July 25.

Trump, Zelensky, and other top Ukrainian officials have denied allegations of any quid pro quo. House Democrats, who hold a majority, voted to impeach Trump for abuse of power and obstruction of Congress, alleging that Trump used the congressionally-approved military aid as a bargaining chip to push for investigations into a political rival. House Republicans voted unanimously against the articles, while a handful of Democrats voted with Republicans on one or both of the articles and one voted “present.”

White House officials have said that the decision to place a hold on the military aid was not linked to the July 25 phone call between the two leaders, adding that the decision was made a week before the call.

And Rachel Semmel, a spokeswoman for the Office of Management and Budget, told reporters last week that media outlets have engaged in “reckless” behavior in “[tying] the hold of funds to the phone call.”

“As has been established and publicly reported, the hold was announced in an interagency meeting on July 18,” she said. “To pull a line out of one email and fail to address the context is misleading and inaccurate.”

Senate Majority Leader Mitch McConnell (R-Ky.) and other Republicans in the Senate have said they do not want witnesses. A day before the impeachment vote on Dec. 17, he told the Brian Kilmeade Show that “I think we’ve heard enough. After we’ve heard the arguments, we ought to vote and move on.”

On the Senate floor, McConnell dismissed Schumer’s proposal for witnesses and evidence.

“The Senate Democratic leader would apparently like our chamber to do House Democrats’ homework for them. He wants to volunteer the Senate’s time and energy on a fishing expedition,” McConnell said.

The Epoch Times has reached out to McConnell’s office for comment.