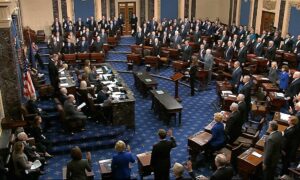 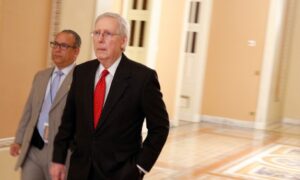 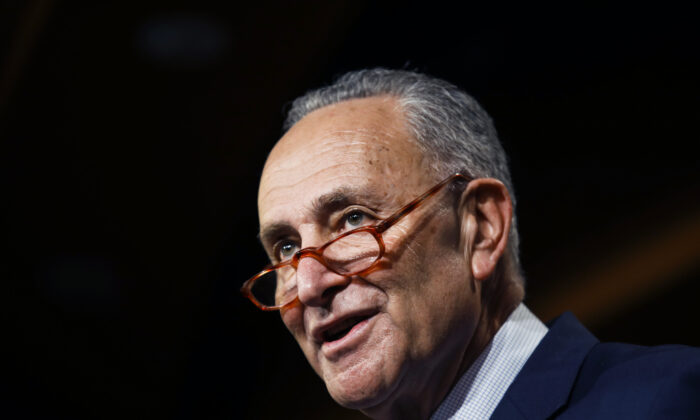 Senate Minority Leader Chuck Schumer (D-N.Y.) talks to reporters about the impeachment trial of President Donald Trump on charges of abuse of power and obstruction of Congress, at the Capitol in Washington on Jan. 16, 2020. (Matt Rourke/AP Photo)
Impeachment Trial

After Republicans voted down an amendment requiring the Senate to call witnesses in the impeachment trial of President Trump, Senate Minority Leader Chuck Schumer (D-N.Y.) claimed on Jan. 22 that Republicans are engaging in a “charade.”

Holding a press conference less than 10 hours after the Senate completed the first day of the trial, which went into the early hours of Wednesday, Schumer highlighted how the GOP voted down an amendment by Sen. Chris Van Hollen (D-Md.) that would require witnesses to be called during the trial.

“That particular amendment revealed the charade that the Republicans are participating in here,” Schumer said.

“It meant that presentations could not rely on this important evidence. That senators cannot ask questions about this evidence,” Schumer added.

“If the president is truely as innocent as he claims, Republicans should want his aides to testify,” Sen. Patty Murray (D-Wash.), the assistant minority leader, said at the press conference.

Senate Democrats at the press conference weren’t asked why the House failed to subpoena the witnesses Senate Democrats want to be subpoenaed. Senate Democrats have also refused to consider witnesses some Republicans want to call, such as former Vice President Joe Biden and Biden’s son Hunter Biden, a refusal Schumer reiterated on Wednesday.

Senate Republicans have said it was up to the House to build an impeachment case and criticized House Democrats, charging they rushed forward without building a proper case. Senate Majority Leader Mitch McConnell (R-Ky.) addressed the issue earlier Tuesday.

“The way the Senate decides to handle mid-trial questions such as witnesses could have institutional consequences that go far beyond this trial and this presidency. We are not going to rush into these questions without even hearing opening arguments,” he said on the Senate floor.

Republicans voted eleven amendments proposed by Democrats down in party-line votes. The last amendment, which would extend the time that trial motions could be filed, garnered one GOP vote from Sen. Susan Collins (R-Maine).

Trump was impeached on Dec. 18, 2019 for abuse of office and obstruction of Congress. House Democrats held the impeachment articles for nearly three weeks before submitting them to the Senate. Senators and Supreme Court Chief Justice John Roberts, who is presiding over the trial, were sworn in last week and the trial started on Tuesday with debate over the resolution outlining the initial part of the trial.

The flurry of amendments proposed by Democrats would have tweaked the trial guidelines, but Republicans hold a 53-47 majority and refused to accept the proposals as the hours went by.

“I think it is appropriate at this point for me to admonish both the House managers and president’s counsel in equal terms to remember that they are addressing the world’s greatest deliberative body,” Roberts said.

“One reason it has earned that title is because its members avoid speaking in a manner and using language that is not conducive to civil discourse,” he added. “I do think those addressing the Senate should remember where they are.”