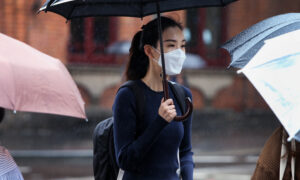 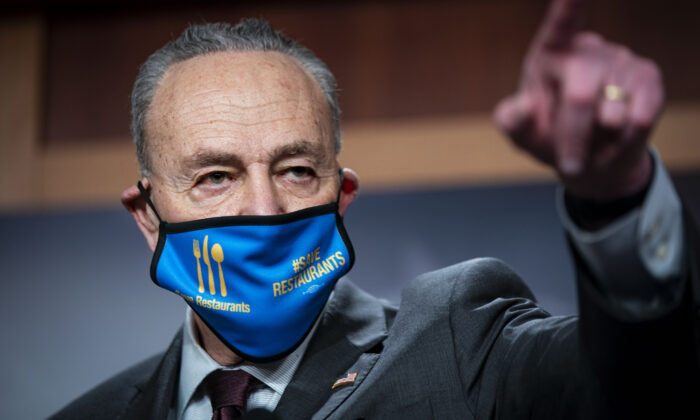 Senate Majority Leader Chuck Schumer on Feb. 23 called for unity within the Democratic Party amid clashes over whether an hourly minimum wage hike should be included as part of a COVID-19 relief bill.

He emphasized in a conference call the importance of Democrats sticking together on President Joe Biden’s $1.9 trillion COVID-19 relief bill, despite ongoing debates on including a provision to raise the federal minimum wage to $15 an hour by 2025.

“I made a pitch today to our entire caucus and I said that we need to pass this bill. The American people, the American public demands it and everyone is going to have things that they want to see in the bill and we’ll work hard to see if we can get those things in the bill,” Schumer told reporters after speaking with the Senate Democratic caucus. “Job No. 1 is to pass the bill. Pass the bill we must. And I have confidence we will do it.”

The Democrat push for the hourly minimum wage hike included in the president’s relief bill has been met with opposition from within the Democratic Party itself. Sen. Joe Manchin (D-W.Va.) has indicated that he opposes the provision, and his vote is needed for the bill to pass via budget reconciliation, a process that would allow it to clear the Senate without Republican votes.

It also remains unclear if a federal minimum wage hike could be approved as part of the CCP (Chinese Communist Party) virus stimulus package via the budget reconciliation process. Senate Parliamentarian Elizabeth MacDonough is expected to rule on the matter before the bill is put to a vote. Manchin said he would propose an alternative $11 amendment if the parliamentarian rules that the hike could be legislated via reconciliation.

Sen. Kyrsten Sinema (D-Ariz.) has also expressed an objection to the provision.

Meanwhile, Republican leadership in the House is recommending a “no” vote on the nearly $2 trillion relief bill.

Sens. Mitt Romney (R-Utah) and Tom Cotton (R-Ark.) on Tuesday announced their own bill, the Higher Wages for American Workers Act (pdf), that proposes to raise the minimum wage to $10 an hour by 2025.

“He’s [Schumer] begging all of us, despite any differences with any one section of the bill, that we hang together,” added Majority Whip Sen. Richard Durbin (D-Ill.) during the press briefing. “This is the signature provision of the Biden administration in terms of dealing with the pandemic and the economy. And we need to stick together. That’s it.”

Schumer and Budget Committee Chairman Bernie Sanders are expected to meet on Feb. 24 with the parliamentarian to discuss whether the federally-imposed wage hike would violate the special budget reconciliation rules that would allow the bill to pass with 51 votes, as opposed to 60.

“Bernie Sanders and I are arguing very strongly for $15 and for it to be reconcilable,” Schumer said. “We’re going to await [MacDonough’s] judgment before we go any further.”