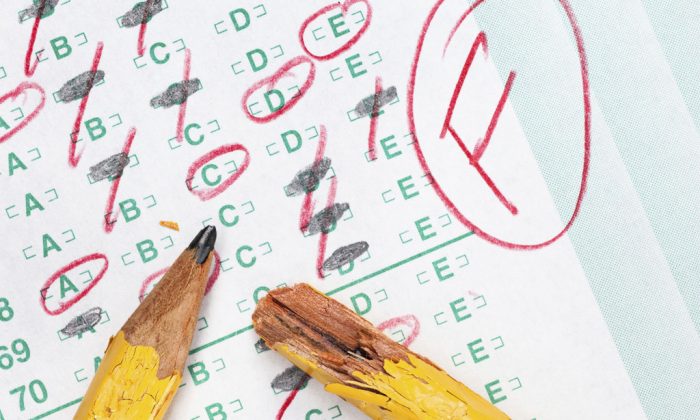 Schools With the Worst Testing Scores

What's the story behind the numbers?
By Petr Svab

Just weeks before this year’s state test scores are going to be released, a charter school advocacy group, Families for Excellent Schools, released a statistical report on 371 city public schools that did the worst on last year’s standardized tests. Yet the test scores don’t tell the whole story.

All middle and elementary schools on the list, mostly in low-income neighborhoods of the Bronx, Harlem, and Brooklyn, had less than 10 percent of the children passing last year’s tests that were made tougher to match the Common Core, a set of learning standards promising better preparation for college. Less than a third of the city’s students were able to pass them.

The report points out that the listed schools struggled even on the previous tests, with less than one-fourth of their students, on average, passing the English exams in 2012.

For high schools, the report listed those having less than 10 percent passing the “college readiness” benchmark, which requires scoring 75 or more on the state’s English regents exam and 80 on the math test. To get a diploma 65 points is enough.

“The vastness of this failure should shock us,” the report states, calling for “investigation and swift, dramatic intervention.” Yet it seems, at least in some cases, intervention is already in place.

Almost half of the lowest-scoring schools were middle schools. Looking more closely at the bottom five, they’re either closing down or have their own story to tell.

The worst testing middle school on the list is Secondary School for Law, except it’s already closed down. Last year it had 19 students, 11 of them with special needs, none of whom passed the state tests.

The second worst, M.S. 203 in the Bronx, doesn’t enroll new students and will close down in 2015 due to poor performance. The third, Choir Academy of Harlem, will close in 2016.

Fourth on the list is The Urban Assembly Institute for New Technologies, a school that opened in 2009 in West Harlem. It has just over 100 students and almost half have learning disabilities. None of the special needs students was able to pass the tests.

Fifth is the Wadleigh Secondary School for the Performing and Visual Arts. Its art programs received high praises on a review portal InsideSchools.org. But the test scores are low, especially in math.

In 2012 Public Advocate Bill de Blasio was among a slew of public officials fighting to keep the school open. That same year, a new principal came in to turn the academics around. Yet, last year no students were able to pass the Common Core math tests and less than 3 percent passed English.