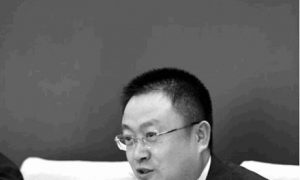 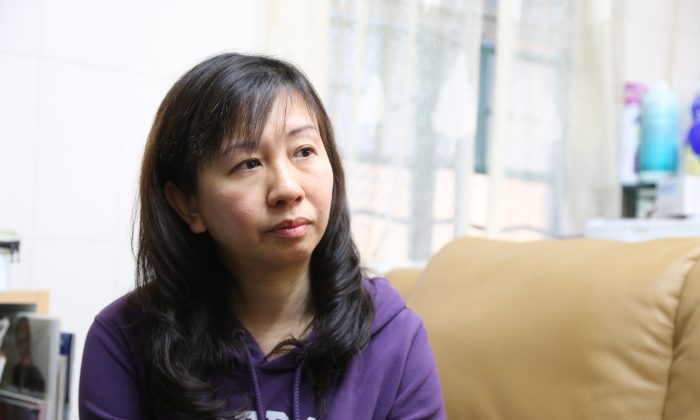 HONG KONG—Fate intervened on July 14, 2013 for Ms Alpais Lam Wai-sze, teacher at a primary school in Fanling, Hong Kong. On that day, out of conscience, she spoke out at a pedestrian zone in Mongkok when she witnessed what she saw as an injustice.

The police had taken no action to stop members of the Youth Care Association from aggressively attacking Falun Gong practitioners at the latter’s truth clarification kiosk. The echoes of her righteous voice have since then created big waves.

In the following months she suffered serious personal attacks: from death threats by the Chinese Communist Party (CCP) to the escalated investigation from the serious crime sector of the police under the instruction of Chief Executive Leung Chun-ying. She has chosen to continue speaking out, because she recognises that to face the CCP directly is the only way.

The CCP used the media under its control to direct slander at Ms Lam and broadcast on the Internet its tailored and censored video tape to back up their story. The way the CCP misled the media by slandering Ms Lam aroused public anger in Hong Kong’s society. Lots of Hong Kong people took the incident of Ms Lam as one of the Top 10 news stories in Hong Kong in 2013.

Teacher Lam spoke in an interview with Epoch Times recently, looking back over the last six months.

The other day somebody shouted at me on the street “a teacher, teaching the wrong thing to children”, but that person was occupying a seat with luggage instead of allowing others to sit down, that situation was quite strange. I felt emotional when facing these insults, I know I have to adjust, I have never experienced this type of persecution before.

Last week someone threw paper money (for the dead) at my doorway. I received five threatening letters, including one signed by a communist member saying that I should not shout at the CCP and I would have to pay for that. The letter contained a blade, and I have reported this to the police.

My family is very upright, and the CCP would not dare to attack them. My family would disclose, would expose the wrong deeds.

My main concern is the school. I do not know how much pressure my colleagues at school have been under. I could not speak for them, neither could I know what their real feelings are. I take full responsibility for my actions, they should not create any disturbance at my school, nor harass colleagues and friends around me.

The school has insisted that I have ruined their reputation; they seem as if they are against me. They gave a lot of examples, as quoted by the other side. I find it very unjust. I have my freedom of speech. I shall live as usual. I hope that the school will act as per what the Bible says about righteousness. That is not the case at the moment, there is no justice for me. I am very sorry for that.

Not Due to Profanity

My being under attack was not because of any profanity, but because I said something that was very displeasing to the Chinese Communist Party. They felt “hurt”! They were concerned their evil deeds would be reported by me, a teacher. The consequences would be enormous, that is why they continued to attack me.

I can see that for years the CCP has been suppressing the progress of democracy and its people. They worry about the powerful subsequent effects [of my disclosure], therefore they continue to spread slander against me on the few profane words I said.

With this incident, I have been very disappointed with some of the media. Except Apple Daily and Epoch Times, other newspapers disregarded the evil deeds of the Communist Party. TVB was also unfair to me, always referring to me as the “profane” teacher, this is a typical brainwashing tactic.

Misled by the CCP

Actually, I feel that a lot of citizens, even netizens, have been misled by tricks. Things have been taken out of context, sidestepping the actual incident, just emphasising the minor details to hide the truth from the citizens. Even my friends have told me that they only saw the censored episode, not the original version. This disappointed me.

Actually Hong Kong people do not understand the CCP. I hope that Hong Kong people think carefully. Today it’s Lam Wai-sze, tomorrow it will be others. If you trust without further thought what the government or the CCP says, the ones who suffer will be the Hong Kong people.

The Communist Party has close economic links with many countries, including Taiwan. But its political system is definitely unsound. Therefore I think that the only hope for a new prospect is to end one-party autocratic rule. I worry for Hong Kong people who are polluted by the CCP’s way of thinking. Therefore I think that Hong Kong people must be united and cautious.

Earning money is important, family is also important, these are closely intertwined in your lives. If you do not use a democratic system to counter-balance the Communist Party, they will corrode your lives. Hong Kong will lose its core values.

We are unarmed, we can only speak out. If we do not tell the truth to the citizens, then justice is not done.We only have the right of freedom of speech. I must use this right to express my thoughts.

Do not let the CCP think they can bully you, to shut down your voice. I have been struggling for sometime, on whether to shut up. Frankly speaking, the school has also told me “better not to speak too much”, or it would be endless, but they do not understand, actually the Communist Party wants to drag this incident on.

The CCP has never changed. Some say that it has improved significantly. But from the news, I recognised that it has never changed. It is still an autocratic country with one party. I feel very lucky being in Hong Kong, that we still have the right to voice our opinion. Though I found that when I spoke out, I would be silenced. I now experience the tragic situation of being persecuted.

How could I continue? Sometimes, it is relative. Though I am persecuted in Hong Kong, I consider myself much luckier than those dissidents on the mainland. At least I have some protection from the citizens in Hong Kong, they will see that I am alright.

In comparison, dissidents like Li Wang Yang have been so persistent. I also have a lot of admiration for some democratic activists and Falun Gong practitioners. They stand firm, the persecution they suffer would certainly be no less than mine!

I learnt from the Bible that Jesus suffered a lot of persecution. I think nobody has suffered more than he. He scolded the autocratic governments. I am proud of him. Sometimes I become depressed in my faith. I am now under persecution. I do not know if Jesus can help me.

I would grumble that it’s painful, but I always remind myself: Jesus is a good example; he even sacrificed his life; he still persisted. He was facing the Roman Government, we are now facing the Communist Party. History repeats!

I shall speak out when it is wrong. If it is right, of course I shall not shout. But then, it was impossible to ignore what the Youth Care Association did to Falun Gong.

Till now, I still ask, why could they [the police] let this happen and disregard the incident? It seems impossible. Has there been any progress since the incident? It appears that the police have taken some action, but why did they wait?

This is the power of citizens, they have supported me, showing up at Sai Yeung Choi Street on Aug. 4. There were more than 3,000 people, and it reached an explosive point.

As for myself, (I regret) that I swore, but next time I shall still speak out if I see similar injustices. I shall be smarter though, and I will notify more citizens and urge them to come to help.

I hope that the school does not receive phone calls of complaint, making them think that I did something very wrong! I hope that I can smoothly resume teaching, but if not, I pray for Jesus to help strengthen my faith, and help me to be a good teacher. Maybe not necessarily at school, but through different channels, through the media, to teach the citizens to care about what is happening in society.

I hope that through speeches and comments I am able to influence citizens, to speak out against injustice; but not just me, one person’s path is too lonely. I hope more people will join me and we can unite together as one voice.

Written in English by Christine Ford.