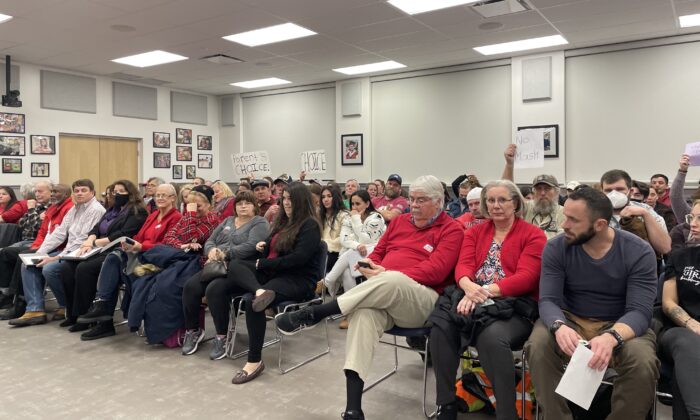 The room reaches a maximum capacity of 154 at the Frederick County school board meeting in Winchester, Va., on Jan. 20, 2022. (Terri Wu/The Epoch Times)
Education & Family News

Masking in school has become a heated issue across Virginia since Gov. Glenn Youngkin signed an executive order on his first day in office, making the masks optional. Subsequently, all Virginia school boards must decide before Monday—when the effective order takes effect—to follow or disregard the order.

Frederick County, the northernmost point of Virginia, has divided neighbors. All school districts in northern Virginia have decided to keep the mask mandate. However, nearby Spotsylvania and Culpeper school systems have made masks optional.

The issue is even more emotional for many Frederick County residents because of a U-turn in August. On Aug. 10, the board voted 4–3 to lift the mask mandate. However, two days later, former Gov. Ralph Northam announced a public health emergency order that required masks in school settings, and the school board followed it.

A lot has happened between August and now. Since then, conservatives have gained a seat on the school board, and a conservative member became the chair in the new year. A new conservative governor, who got 69 percent of the votes from the county, has also taken office.

Some parents were hopeful when they read Superintendent David Sovine’s email on Jan. 18. The email informed them that the mask mandate was still in place until Jan. 24, adding, “although the Governor’s order makes wearing masks optional for students, the school division is strongly encouraging students to continue to wear masks.”

Yet, Thursday night, they were dealt another U-turn. The school board voted 4–3 to keep the mask mandate and have the superintendent continue to review COVID data and the need for face-covering requirements.

During public comments, several parents said they were surprised by the need for a special school board meeting on mask mandates.

“Prior to the beginning of the school year, this very school board gave the parents an option to either send their child to school with a mask or not. Two days later, our former governor mandated we send the children to school in masks; we had no choice but to follow those orders,” said one mother.

“Why is it different now? Why? The governor says exactly what this school board planned to do last year. And now we are fighting for this to happen,” she added.

Terence Sears, husband of the new Lieutenant Gov. Winsome Sears and a county resident, also joined the podium. “As an advocate for these parents and parents across the state, let them make the choice for their children and their families,” he pleaded to the board.

“Do not force it down our throat with mandates. These are not laws. It’s a mandate. So, you were fine with the mandate of Northam? Okay, [you] didn’t question it, feeling like lemmings. But, now, as President Obama said, elections have consequences,” added Sears.

Both sides—for and against the mask mandate—had strong opinions; the audience in the room frequently applauded and cheered during speeches.

Many people showed up; the room had reached the maximum capacity of 154 before the meeting, so administrators opened the auditorium of James Wood Middle School across the street for additional attendees. Although chair Brandon Monk cut the public comments after about 25 speakers, the meeting went beyond 11 p.m.

Shaniqua Williams, president of the Frederick County Education Association (FCEA), told the board, “You’ve received hundreds of emails; your vote tonight should not be based on your personal opinions and beliefs.”

She added, “If you make mask-wearing an option, you have just increased the stress tenfold,” referring to the current stress of dealing with a rise in COVID infections in schools and a shortage of staffers and substitute teachers. FCEA is the local teacher’s union.

At the meeting, Superintendent David Sovine also recommended keeping the mask mandate over concerns of an increase in isolation and quarantine for students and staff, staffing shortages, and challenges with contact tracing.

The school board also invited Dr. Jeffrey Feit, population health and community health officer of Valley Health, which owns multiple hospitals and medical centers in the Top of Virginia region, to provide his opinion.

“The decision to allow choice in masking in school is a decision for all to be exposed,” said Feit. He advised against mask choice but said it might be good to delay the decision for four to six weeks, partly to wait out the current Omicron surge and compare the results in the Virginia counties that kept the mask mandate and those who didn’t.

Before public comment, the board held a closed session to consult legal counsel on the matter of the school mask mandate.

“Listen, if you want to be sued, all you have to do is ask,” said one mother to the board members. She added if the board voted to disregard the governor’s order, she would bring forward a lawsuit.

School board chair Brandon Monk mentioned that the board received over 300 online comments about masks. In addition, a teacher delivered 166 signatures supporting the mask mandate to the board before she spoke during public comment. Monk also said that he had over 500 related emails in his inbox.

Monk mentioned that teachers and staffers in the school system who wanted masks optional often requested to remain anonymous. “That, to me, suggests a culture that is negative in our school system—the way our staff can’t feel comfortable sharing their input,” he said.

Newly elected member of the County Board of Supervisors Josh Ludwig told The Epoch Times that the situation was difficult. It seemed that the school board would be sued no matter which way it voted, he added.

“Tonight, we asked the Supreme Court of Virginia to protect the fundamental rights of parents to direct the upbringing, care, and education of their children,” Miyares said. “Governor Youngkin had every power to issue the executive order, and with our filing, we again affirm that parents matter.”

Thursday night, the school board of Chesapeake, an independent city in Virginia, voted 7–1 to remove the mask requirements.

Senate Bill 1303, due to expire on Aug. 1, says that school boards must offer in-person instruction in a manner that adheres to mitigation strategies to curb the transmission of COVID-19 as outlined by the Centers for Disease Control and Prevention, or CDC.

State Sen. Siobhan Dunnavant, a Republican and author of the Senate bill, issued a statement this week: “SB1303 has been used against our children and against its intent this school year to advance an agenda. SB1303 does not mandate the use of masks in school because the CDC does not mandate masks.”

Public health law professor Lawrence Gostin at Georgetown University told The Epoch Times, “CDC doesn’t mandate masks because it has no power to do so. Instead, states have that power.”

“Masks are highly effective in slowing the spread of COVID-19. Therefore, unless they pose undue burdens, virtually all public health professionals recommend masking, including mandating masks,” he added.

“I have said all along that we are going to stand up for parents. Executive Order 2 is not about pro-masks versus anti-mask, it’s about empowering parents,” Youngkin said.