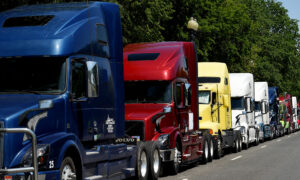 A school bus collided with a car on Friday evening in Sanford, Fla., according to reports. At least one person was killed.

The victim’s name was not released.

Emergency crews are on the scene, reported WFTV. The crash took place on State Road 417 near Reagan Boulevard in Sanford.

First Coast News reported that two people were taken to the hospital.

None of the students on the bus were seriously hurt in the incident.