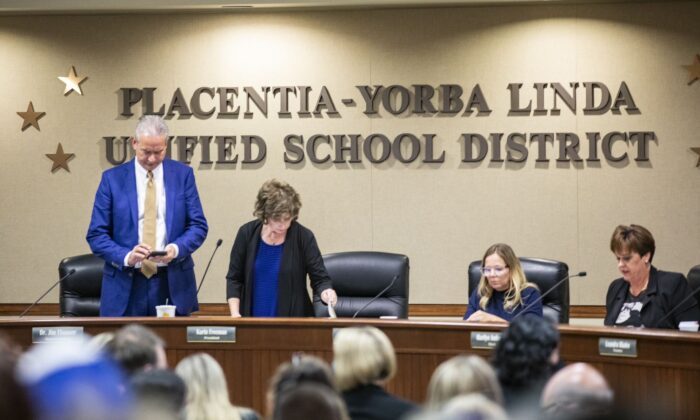 The Placentia-Yorba Linda school board voted earlier this month to remedy two board members’ alleged violations of a government transparency law as identified by the Orange County District Attorney’s office.

The board voted 3–0 on Aug. 9 to approve a resolution that admits to alleged potential violations of the Brown Act, a law that requires local government affairs to be open to the public. The two board members in question—Leandra Blades and Shawn Youngblood—abstained from the vote.

A district attorney’s office spokesperson said to the board they would not prosecute if the board approved the resolution.

The issue stems from when the district attorney’s office received a complaint to investigate Carrie Buck, president of the school board, after she made a unilateral decision to adjourn two January meetings in a row, just minutes after they began, due to members of the public refusing to wear masks in the board room amid a mesh mask prohibition debate.

However, the district attorney cleared Buck of any potential violations, deeming it within the board president’s right to adjourn a meeting without calling for a vote.

At the same time, the DA’s office identified Blades and Youngblood as having allegedly violated the Brown Act.

The DA’s office pointed to a special meeting in February, accusing Blades of breaking the law when she requested an emergency measure to bar any policy that would prohibit mesh masks.

The DA’s office said Blades should not have brought up the measure as it was not on the agenda and did not consider her measure qualified as an emergency.

Blades told The Epoch Times she was never in violation of the Brown Act because her emergency motion failed to get enough votes to pass.

“I had every right as an elected official to try and represent my constituents whose children were being removed from school and the classroom over teachers’ and principals’ opinions over what an appropriate mask is. This all stemmed from this unilateral mesh mask policy,” she said.

The Brown Act requires members of the board to remain at an identified location accessible to members of the public, no matter where they are if they choose to join by telecommunication.

Both Blades and Youngblood said at the meeting the district attorney’s office did not reach out to them regarding the alleged violations.

Youngblood said he did not discuss the issue at the meeting because of this.

The vote means the board acknowledges Blades’s mesh mask resolutions were not properly agendized for a special or emergency meeting and that Youngblood’s driving during the meeting violated the Brown Act, according to the resolution.

The board’s counsel will also provide training for the elected officials on the Brown Act.

Buck and Youngblood did not respond to a request for comment.