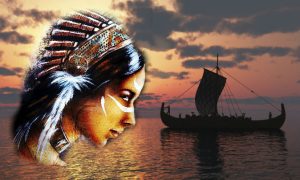 Did a Native American Travel With the Vikings and Arrive in Iceland Centuries Before Columbus Set Sail?
0
Share Now
TelegramFacebookTweetEmailTellMeWeReddit
Copy Link 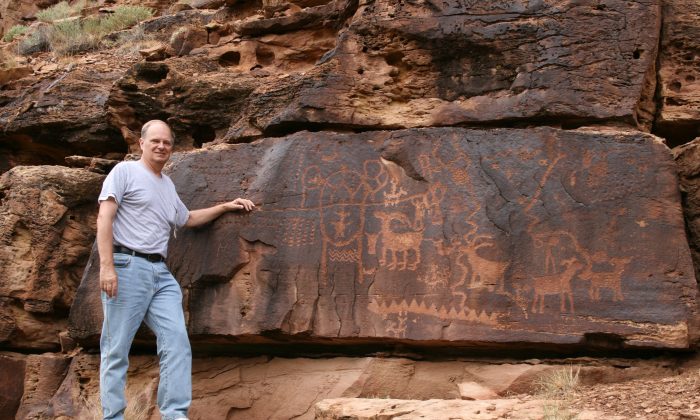 John A. Ruskamp stands near petroglyphs that match ancient Chinese script in Nine Mile Canyon, Utah. (Courtesy of John A. Ruskamp)
Beyond Science

Startling findings reported on by Epoch Times earlier this year have gained increasing interest in the worldwide academic community, and more pieces to the puzzle are falling in place.

Petroglyphs found on rock faces in the United States that match ancient Chinese script suggest ancient Chinese expeditions landed in the New World centuries before Christopher Columbus or even the Vikings.

John A. Ruskamp Jr., Ed.D., has led the research on these petroglyphs, which have been found in Arizona, Utah, Nevada, New Mexico, and other parts of the country. The findings could radically change world history. Some experts are excited, others scathingly criticize Ruskamp’s work. This divide often occurs around groundbreaking discoveries.

Scholars in China are taking a particular interest in the petroglyphs, while the Society for American Archaeology dismisses them.

Upon a preliminary analysis of glyphs found on a private ranch in Arizona, Prof. Ma Baochun of Capital Normal University in Beijing has said they could be pre-Qin Dynasty characters, based on the writing style (the Qin Dynasty began in B.C. 221 ). “The form and structure … are close to oracle bones,” he added in an email to Ruskamp.

The oracle-bone style of writing disappeared by royal decree from mankind’s memory around B.C. 1046 , following the fall of the Shang Dynasty. It remained an unknown and totally forgotten form of writing until it was rediscovered in 1899 A.D. at Anyang, China.

Ma’s statements concur with the independent analysis made by David N. Keightley, Ph.D., a MacArthur Foundation Genius Award recipient who is considered by many to be the leading analyst in America of early Chinese oracle-bone writings.

Chen Lung Chuan from Taipei got involved with Ruskamp’s research after reading about it in an Epoch Times article earlier this year. He translated the same petroglyphs: “Together we hide/left, ten years together; singing about (the) ‘City of Songs,’ returning to (the) ‘City of Sun’; in (the) year of (the) Tiger, we return together.”

There is some room for interpretation in ancient Chinese script, but the translations are very similar.

Ruskamp met with Keightley on May 25 to further discuss the petroglyphs. Keightley noted that the use of four symbols in each of the Arizona cartouches conforms with a style used for writing poems in the Zhou era (1046–256 B.C.). Keightley also suggested that the scripts on a large boulder in Rinconada Canyon, Albuquerque, match the syntax and convention of Chinese sacrificial rites.

Scripts on a large boulder in Rinconada Canyon, Albuquerque, match the syntax and convention of Chinese sacrificial rites.

Ruskamp said: “Now to be fair, Keightley states that this is ‘plausible,’ for he is very conservative in his commentary, and wants to get it absolutely right. Nevertheless, it seems that now we have another important part of the overall puzzle, that is, datable script styles in agreement with the known style of writing used for such ancient Chinese documentations.”

Ma said in July that he will start sharing Ruskamp’s findings in Chinese academic circles: “I want to tell Chinese scholars of your important find.”

The Society for American Archaeology included a review of Ruskamp’s book, “Asiatic Echoes,” in the July edition of its journal American Antiquity. Ruskamp’s work was featured in a section dedicated to “pseudoarchaeology.”

Angus R. Quinlan of the Nevada Rock Art Foundation wrote the review, which leaned heavily on the argument that no incontrovertible archaeological evidence has been found for Chinese visits to North America (such as the remains of weapons, a settlement, et cetera).

Quinlan wrote: “If ancient Chinese explorers had visited America then surely some archaeological remains of these visits would have been found … Any resemblance between ancient Chinese script characters and some North American rock art is ‘fortuitous’ due to the wide morphological variability of the latter.”

Ruskamp noted in a response to the review: “This study is epigraphic in nature, it is ongoing, and it is not archaeological, per se. … Most importantly, all of the study’s Chinese North American pictogram-glyphs have been independently confirmed as having forms that match with known ancient Chinese scripts by no less than five recognized and esteemed sinologists, all of whom have expertise in the evaluation of ancient Chinese calligraphy.”

Chinese North American pictogram-glyphs have been independently confirmed as having forms that match with known ancient Chinese scripts by no less than five recognized and esteemed sinologists.
— John Ruskamp

Quinlan has no known expertise in reading ancient Chinese script, Ruskamp said. He felt his work had been labelled “pseudoarchaeology” before any critical review.  Professor Emeritus Stephen C. Jett, Ph.D., University of California–Davis, is currently conducting a peer review of Ruskamp’s work, and has told Ruskamp he views it favorably. It will likely be published in the journal Pre-Columbiana, edited by Jett, after the review process is complete.

In “Asiatic Echoes,” Ruskamp analyzed 53 North American rock art motifs, paired with corresponding Chinese pictograms, using Jaccard’s Index of Similarity. This index was developed by 19th century botanist Paul Jaccard and it is used to statistically compare the similarity between sample sets. It is less than 5 percent likely that each example of the motifs and pictograms shared by the Chinese and Native Americans were formed independently. In many cases, the chance is less than one percent. Thus, it is most likely that the Chinese are responsible for leaving most of these pictograms in North America. Some likely are copies made by Native Americans for their own purposes.

Quinlan noted that the swastika, found in ancient cultures all over the world (including in China, where it was a Buddhist symbol) would also pass this Jaccard Index test. The implication is that, if the swastika could appear all over the place independently, why couldn’t all 53 of the symbols analyzed by Ruskamp also appear independently in China and North America?

The appearance of the swastika across the ancient world is an interesting phenomenon, and no one can know for sure why this occurred. The swastika may be an anomaly in this regard. The chances of 53 complex ancient Chinese script symbols being similarly anomalous is slim to none, Ruskamp said.

Ruskamp added, in an email to Epoch Times: “The relative simplicity of the swastika, like other universal symbols such as stickmen, is nothing compared to the complexity of such Chinese symbols as Xiang (elephant) or Xian (sacrificial offering). In fact, Xian is a composite of three separate symbols, a dog, a tiger head, and a cauldron. So the swastika, which I first mention in Asiatic Echoes as an anomaly, is really in a different category than symbols used in formal written languages.”

The relative simplicity of the swastika, like other universal symbols such as stickmen, is nothing compared to the complexity of such Chinese symbols.
— John Ruskamp

Having analyzed Ruskamp’s photos of the petroglyphs, Quinlan said some of the designs appear to be from a later date than others, something Ruskamp doesn’t seem to take into account.

Ruskamp wrote: “One comment generated by readers of the various media articles, and also made by Quinlan, is that some aspects of a few of the study’s pictogram-glyphs appear to be of more recent manufacture. This unfortunate observation is because the photos used for publishing have all been electronically enhanced so that their individual line strokes appear clearly in print.” He has now published photos without the enhancement.

Ruskamp also consulted Michael F. Medrano, Ph.D., chief of the Division of Resource Management for Albuquerque’s Petroglyph National Monument, to date some of the petroglyphs. Medrano said that, based on his more than 25 years of experience with local Native cultures, “These images do not readily appear to be associated with local tribal entities,” and “based on repatination appear to have antiquity to them.”

The investigation continues, and Ruskamp has found many interested and qualified collaborators. He hopes all scholars will keep an open mind, and further investigate where something is missing in his research rather than dismiss the research wholesale. For him, the evidence is so strong it warrants serious consideration.