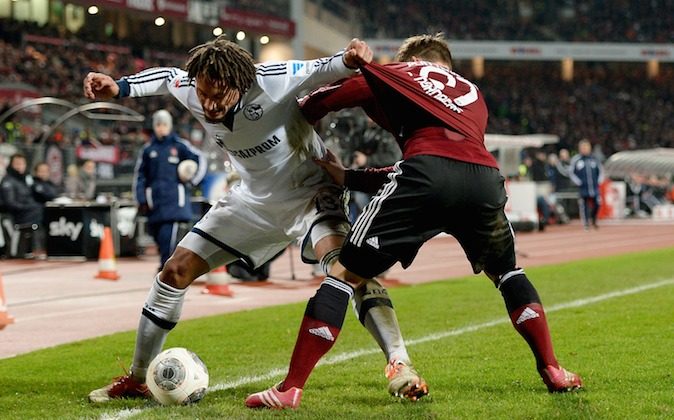 Jermaine Jones (L) of Schalke and Marvin Plattenhardt of Nuernberg compete for the ball during the Bundesliga match between 1. FC Nuernberg and FC Schalke 04 at Grundig Stadium on December 21, 2013 in Nuremberg, Germany. (Photo by Micha Will/Bongarts/Getty Images)
Soccer

The Schalke 04 vs Nuremberg Bundesliga match is set for Saturday, May 10.

The game will be broadcast on Sky Bundesliga HD in Germany.

The game will also air on GOLTV USA and MyGermanTV + in the United States.

Here is an AP column on Schalke’s race for a Champions League spot.

Schalke, which hosts Nuremberg, is looking over its shoulder at Bayer Leverkusen, the only side that could overtake it on goal difference for third place and automatic qualification for Europe’s premier competition.

Leverkusen, which hosts Werder Bremen, is not even assured of fourth for a Champions League playoff, with Wolfsburg and Borussia Moenchengladbach lurking one and three points behind, respectively.

Wolfsburg hosts ‘Gladbach with both hoping for a favor from Bremen. If Leverkusen loses, even a draw would be good enough for Wolfsburg due to its superior goal difference, while ‘Gladbach could snatch fourth on goal difference by winning in Wolfsburg — if Bremen also wins.