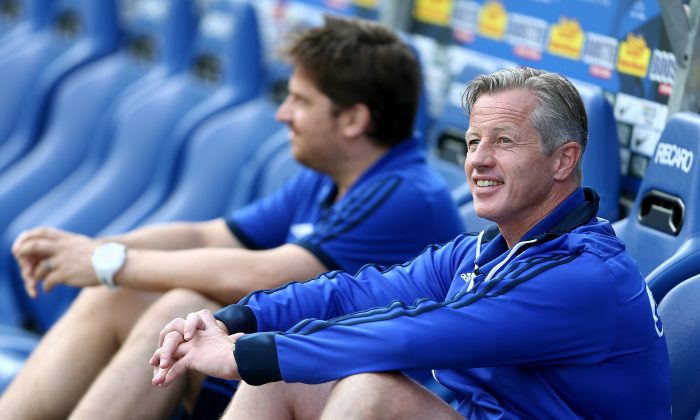 Head coach Jens Keller of Schalke sits on the bench prior to the pre-season friendly match between VfL Bochum and FC Schalke 04 at Rewirpower Stadium on August 5, 2014 in Bochum, Germany. (Photo by Christof Koepsel/Bongarts/Getty Images)
Europe

Schalke 04 will take on Dynamo Dresden in a German Cup match on Monday, August 18.

The game will be broadcast on ARD Das Erste and Sky Go in Germany.

The game will also air on ESPN3 in the United States.

BERLIN—Borussia Dortmund defeated third-division Stuttgarter Kickers 4-1 in the first round of the German Cup on Saturday, while Bundesliga side Stuttgart lost 2-0 at second-tier Bochum.

Dortmund defender Lukasz Piszczek crossed for Henrikh Mkhitaryan to score on the half hour, though the home side created the better chances before the break.

Pierre-Emerick Aubameyang capitalized on a defensive mistake to make it 2-0 in the 55th, five minutes before Kickers striker Randy Edwini-Bonsu pulled one back.

Aubameyang all but sealed the result with his second in the 78th and Adrian Ramos completed the scoring in the 89th.

Marco Reus started for Dortmund after recovering from the left ankle injury that forced him out of Germany’s World Cup-winning campaign.

With the exception of Stuttgart’s loss to Bochum, the second division’s early leader, results went as expected.

Former Real Madrid striker Joselu scored twice on his competitive debut for Hannover, which had defender Marcelo sent off in the first half.

Cologne, back in the Bundesliga this season, enjoyed a 4-0 win over fourth-division FT Braunschweig.

Another second-division side, Greuther Fuerth, won 3-0 at sixth-tier SV Waldkirch — the lowest ranked side in action on Saturday.