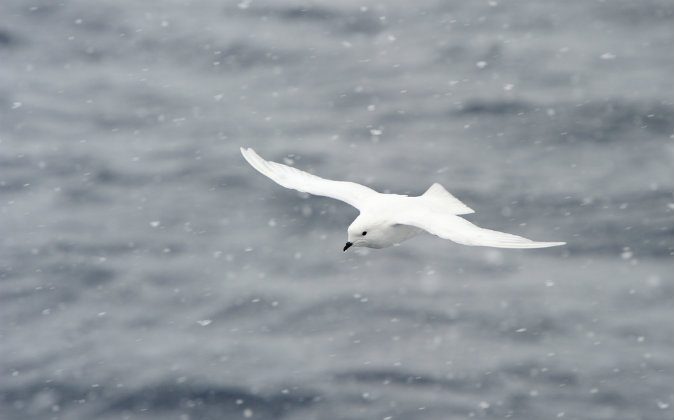 The top predators of the Southern Ocean, far-ranging seabirds, are tied both to the health of the ocean ecosystem and to global climate regulation through a mutual relationship with phytoplankton, according to newly published research.

When phytoplankton are eaten by grazing crustaceans called krill, they release a chemical signal that calls in krill-eating birds. At the same time, this chemical signal—dimethyl sulfide, or DMS—forms sulfur compounds in the atmosphere that promote cloud formation and help cool the planet.

Seabirds consume the grazers, and fertilize the phytoplankton with iron, which is scarce in the vast Southern Ocean.

“The data are really striking,” says Gabrielle Nevitt, professor of neurobiology, physiology, and behavior at the University of California, Davis, and co-author of the paper with graduate student Matthew Savoca. This suggests that marine top predators are important in climate regulation, although they are mostly left out of climate models, Nevitt says.

“In addition to studying how these marine top predators are responding to climate change, our data suggest that more attention should be focused on how ecological systems, themselves, impact climate. Studying DMS as a signal molecule makes the connection,” she says.

Nevitt has studied the sense of smell in ocean-going birds for about 25 years, and was the first to demonstrate that marine top predators use climate-regulating chemicals for foraging and navigation over the featureless ocean. DMS is now known to be an important signal for petrels and albatrosses, and the idea has been extended to various species of penguins, seals, sharks, sea turtles, coral reef fishes, and possibly baleen whales, she says.

Phytoplankton are the plants of the open ocean, absorbing carbon dioxide and sunlight to grow. When these plankton die, they release an enzyme that generates DMS.

In the 1980s, researchers proposed a role for DMS in regulating climate. According to this hypothesis, warming oceans lead to more growth of green phytoplankton, which in turn release a precursor to DMS when they die.

Rising levels of DMS in the atmosphere cause cloud formation, and clouds reflect sunlight, helping to cool the planet. It’s a negative feedback loop to control the planet’s temperature.

Savoca and Nevitt looked at 50 years of records on seabirds’ stomach contents, combined with Nevitt’s experimental results of which species use DMS to forage. They found that species that respond to DMS overwhelmingly fed on krill, which graze on phytoplankton.

On land, there are several known examples of plants that respond to attack by insects by producing chemicals that attract predators that eat those insects. Nevitt and Savoca propose the same thing happens in the open ocean: when phytoplankton come under attack by krill, the DMS released as they die attracts predators that eat the krill.

The birds have something else to contribute. The Southern Ocean lacks large land masses, and is relatively poor in iron, which has to be washed out from land by rivers. Krill are rich in iron, but birds can absorb relatively little of it—so the rest is excreted back into the ocean, promoting plankton growth.

The work suggests that by linking predatory seabirds and phytoplankton—the top and bottom levels of the food chain—DMS plays an important role in the ocean ecosystem, which affects climate by taking up carbon, as well as a physical role in generating clouds, Nevitt says.

“Studying how seabirds use scent cues to forage has shown us a mechanism by which the seabirds themselves contribute to climate regulation. That’s not what we expected, but I really think our results will have global significance,” she says.

At the same time, numbers of these birds are declining, with almost half of species listed as vulnerable, endangered, or critically endangered. The newly discovered links between top predators and the base of the ocean food web mean that a decline in seabirds could have a significant effect on the marine productivity.

The National Science Foundation funded the research, which appears in the journalProceedings of the National Academy of Sciences.

*Image of a snow petrel via Shutterstock