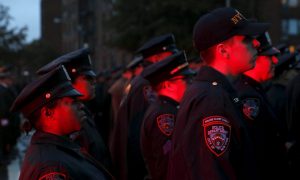 NEW YORK—President Donald Trump pressed the mayor of New York on July 25 to “stand up” for police officers who have been doused and sprayed with water.

Videos showing law enforcement being doused with buckets of water surfaced at the end of a stifling heatwave on July 22. What was surprising to many—including the president—was that no arrests were made by the soaked and humiliated officers of the law.

We love our Law Enforcement Officers all around this great Country. What took place in NYC with water being tossed on NYPD officers was a total disgrace. It is time for @NYCMayor @BilldeBlasio to STAND UP for those who protect our lives and serve us all so well…

“What took place was completely unacceptable, and will not be tolerated,” wrote President Trump on Twitter. “Bill de Blasio should act immediately!”

Mayor de Blasio, however, responded with criticisms toward the president and insinuated that police officers are already protected. Since the videos surfaced, the mayor has condemned the conduct of those dousing the officers. Three suspects have been arrested.

“Rather than try to bring peace, and bring people together, he takes the opportunity to build upon his base, and keep the anti-police atmosphere in existence,” said the President of the SBA Ed Mullins in an interview with NTD News, adding, “which in turn creates harms-way for officers that are out on patrol.”

The anti police attacks have become a nationwide problem for every officer working to help the public. To the millions of people who support police YOU CAN NO LONGER STAY SILENT YOU MUST STAND AGAINST ELECTED OFFICIALS & PHONY POLICE CHIEFS who put your communities at risk. ???????????????? https://t.co/t9X9aCEWNB

New York’s finest lost trust in the mayor for his support of Black Lives Matter (BLM) and doing away with the stop-and-frisk policy—a policy many officers accredited to lowering the crime-rate, according to TIME. BLM protesters are known for attacking law enforcement and chanting obscenities aimed at officers such as, “Pigs in a blanket! Fry ’em like bacon!”

While mourning two fellow officers, slain in 2014, hundreds turned their backs on the mayor as he gave his speech at the ceremony.

When the Uniform of Integrity is Smeared

But amid the puzzling water-dousing phenomenon of New York, Mullins sees another problem—besides the lack of respect people have for officers.

SBA has posted on Twitter at least five videos of five different cases where people harass and or douse police in water this week. “My question to everyone is, why did all the officers choose to do nothing?” asked Mullins.

NYPD has surrendered under O’KNEEL-ANOTHER WATER TOSSING VIDEO. No more MEMO’s- DEFEND YOURSELF before YOU get seriously injured or KILLED. These buckets can contain ACID, BLEACH or other CHEMICALS. Obtain exposure numbers. O’KNEEL MUST GO, take the CLOWNS with you! No CONFIDENCE pic.twitter.com/9W5ABFq0Wz

He blames this on what he calls the “Pantaleo effect,” in reference to Officer Daniel Pantaleo, who was caught in the midst of a years-long civil rights investigation.

The officer, joined by others, arrested Eric Garner in 2014 for selling illegal cigarettes. During the arrest, Garner died of an asthma attack, prompting protests against police brutality from groups such as BLM.

On July 16, Attorney General William Barr said the Justice Department would not federally charge Pantaleo as there was insufficient evidence to do so.

Mullin said law enforcement officers are afraid of becoming the next Pantaleo. Although he understands why the drenched officers made no arrests, he disagrees with their actions.

But there is a solution, he said, and it begins with the mayor who is aware of the anti-police sentiment in the United States.

“I’ve been president of the union for 18 years, he’s been mayor for five—never once has he brought all the police unions in and said, ‘Hey, how can we really work something out with people?'”