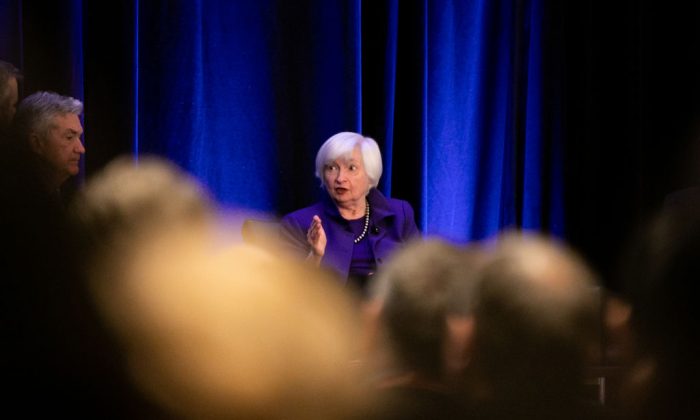 Saying ‘No’ to Janet Yellen and Other ‘Establishment’ Economists

Something unusual and unexpected happened to me last week: I got an email from Janet Yellen, the previous chair of the Federal Reserve. At first I thought it might have been spam, but it was legitimate.

But why would Ms. Yellen be writing to me? Not only had there been zero prior contact between us, but I have long been a critic of the Federal Reserve in general and of Yellen in particular.

As it turns out, Yellen wrote to me because she is spearheading an effort by a number of famous economists to get as many American economists as possible to endorse a petition asking Congress to adopt a so-called “carbon tax.”

The purpose of a carbon tax is to reduce the carbon dioxide-producing emissions caused by the use of carbon-based fossil fuels on the alleged grounds that failing to do so will lead to dangerous climate change. By steadily raising the tax on fossil fuels, the use of such fuels will become increasingly costly. Rising prices will lead to reduced demand and consumption of fossil fuels as consumers switch to “renewable” sources of energy to escape the carbon tax.

It should be added that Yellen and others advocate a carbon tax as the economically least disruptive way of weaning our society from fossil fuel consumption.

I will not sign this petition. My primary reasons for not doing so are threefold.

1) We economists have no professional standing or qualifications to take a collective position on the issue of climate change. I refuse to surrender my right of conscience and blindly join the herd.

Yellen and her pro-carbon tax colleagues should know that the science of climate change has no more power to predict the future accurately than does the science of economics. Indeed, as economists, they should recognize that climate scientists confront the same barriers to predicting the future that economists do—namely, that there are far too many variables, only some of which are known, and that the relationships between these variables are imperfectly understood.

I am disappointed with my fellow economists for jumping on the bandwagon of a cause that can’t even pass the smell test. The notion that a trace gas like carbon dioxide (about 0.04 percent of Earth’s atmosphere) is the thermostat that regulates Earth’s temperatures is belied by the irrefutable historic fact that over the course of planetary history, CO2 and temperatures have not correlated.

If anything, the economics profession should wish to distance itself from the U.N.-propagated official position on climate change due to unseemly and unscientific manipulations of facts and data. Examples of shenanigans at the U.N.’s Inter-governmental Panel on Climate Change (IPCC) are legion (I report several in my e-book, “The Big Picture: The Science, Politics, and Economics of Climate Change“) but the latest example should suffice.

The fine print in footnote 5 on page 6 of the Summary for Policymakers in the latest IPCC Report states: “Present level of global warming is defined as the average of a 30-year period centered on 2017 assuming the recent rate of warming continues.”

2) The second reason I won’t support pleas for a carbon tax is that—apart from the folly of diverting even more money to the mismanagement of Congress—a new tax on energy would suppress economic growth. After eight years of anemic growth during the Obama years, the economy, thanks to President Donald Trump’s tax and regulatory relief, recovered to 3 percent growth, but a major new tax burden on the economy will push growth back down to subpar rates.

Forcing Americans to pay artificially higher prices for energy (which is the precise purpose of a carbon tax) will leave less money to purchase other goods and services. This reduces standards of living and is especially burdensome to poorer Americans; therefore, I cannot endorse such a course of action.

Imposing a growth-choking tax would be hugely unfair to Americans vis-á-vis China. I have seen estimates that just the increase of CO2 emissions in China over the next few decades will exceed all U.S. emissions today. In other words, even if all CO2 emissions in the U.S. were eliminated, total global emissions will rise.

Therefore, if you believe the hyped doom-and-gloom scenario, the world is doomed regardless of what we Americans do. But if the hype isn’t true (hint: it isn’t) then the world will look like this: Environmentally, the world will continue to get greener like it has over recent decades as plants thrive in a CO2-enriched atmosphere; economically, an America that cripples economic growth by making energy less affordable through a carbon tax will languish economically while China—avoiding the error of making energy more expensive—will race ahead. This isn’t what Americans need or want.

It is hugely disappointing that a special appeal from illustrious economists would call for a tax increase at any time—not just at a time when economic growth is particularly vulnerable. I am sure that Yellen et al. understand the economic hazards posed by chronic federal deficits; after all, it was to keep the interest expense of the Obama era’s gigantic deficits manageable that she and her predecessor, Ben Bernanke, suppressed interest rates throughout the entire Obama presidency. The economically healthier way to address budget deficits is not to increase the tax burden on the private sector, but to cut government spending and leave more resources in the private sector where they can be allocated more productively.

Ask me to sign a petition asking Congress to reduce spending instead of raise taxes, and I’ll sign it.

3) The Yellen proposal also includes calls for a tariff designed to raise prices of imports produced using fossil fuels. What a stark contrast from 1930 when the economics profession rallied in opposition to the proposed Smoot-Hawley tariffs—tariffs that were signed into law by Herbert Hoover and immediately plunged the country into a recession that ultimately became the Great Depression.

Like most economists, I have long advocated the abolition of tariffs. I have held off from condemning Trump’s tariffs only in the hope that somehow his trade war will succeed in extracting concessions such as reduced trade barriers abroad and that he will then remove American tariffs. The current Trump-imposed tariffs involve considerable risk, and for Yellen et al. to propose additional tariffs at this fragile juncture is—like the rest of Yellen’s proposal—unwise.