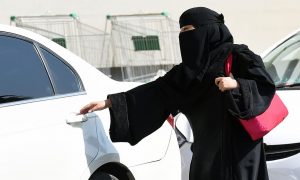 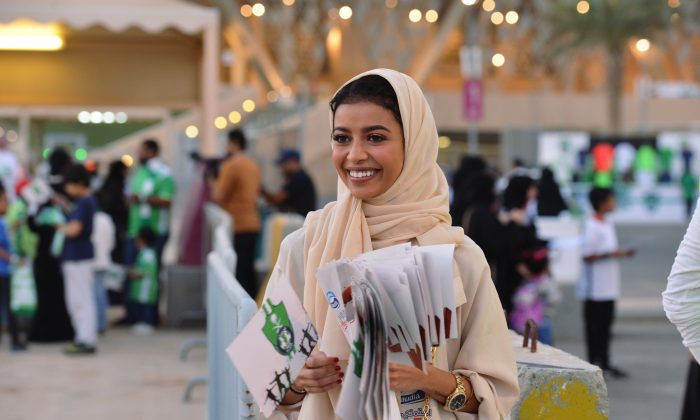 A Saudi woman is seen during the soccer match between Al-Ahli against Al-Batin at the King Abdullah Sports City in Jeddah, Saudi Arabia Jan. 12, 2018. (Reuters/Reem Baeshen)
Middle East

JEDDAH–Women in black abayas and fluorescent orange vests stood at the gates at King Abdullah Stadium, welcoming people into the family section that, for the first time in Saudi Arabia, allowed women to attend a men’s soccer match.

As the two teams al-Ahli and al-Batin faced each other in the city of Jeddah, women showed up to their first public sporting event in the Kingdom to support the sides with their spouses, children and friends.

The General Sports Authority announced in October that stadiums in Jeddah, Dammam and Riyadh will be set up to accommodate families starting in 2018.

“Honestly this decision should have happened a long time ago,” said Muneera al-Ghamdi, an attendee. “But thank god that it came in the right time, and hopefully what’s to come will be even more beautiful for women.”

The decision to allow women to attend a mixed public sporting event is one of many changes the country has undergone in recent months, hailed as proof of a new progressive trend in the deeply conservative Muslim Kingdom.

On Thursday, Jeddah held Saudi Arabia’s first car exhibition aimed at women, a few months after Saudi Arabia announced it would grant them the right to drive.

A soccer match on Saturday in the capital Riyadh will also be welcoming women fans.

Crown Prince Mohammed bin Salman, 32, has been hailed as the face of these changes.

Many young Saudis regard his recent ascent to power as proof their generation is taking a central place in running a country whose patriarchal traditions have for decades made power the province of the old and blocked women’s progress.

“Today the percentage of those who participate in exercise and sports is only 13 percent,” said Hayfaa al-Sabban, who heads a sport organization.

“We aim god willing to raise it to 40 percent by 2030, through several events, and today’s is one of these events.”