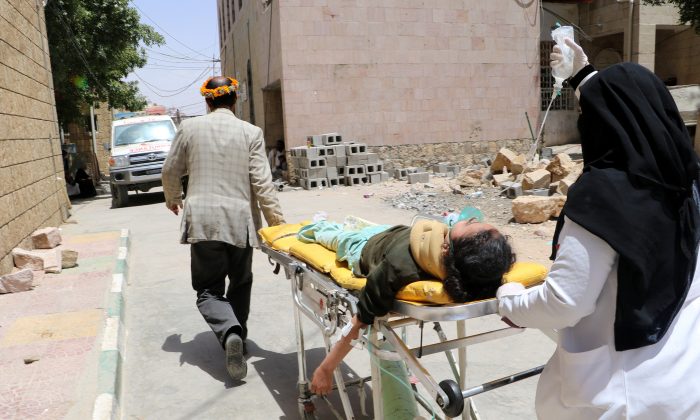 A school girl is being rushed on a stretcher to a hospital after she was injured by an airstrike near her school in Saada, Yemen April 9, 2018. (Reuters/Naif Rahma)
Middle East

Saudi-Led Coalition Says It Does Not Seek Permanent Yemen Presence

DUBAI—The spokesman for a Saudi-led coalition said on Tuesday that its military campaign in Yemen was not aimed at establishing a permanent presence along the country’s West coast but at restoring its internationally recognized government.

A Yemeni official had told Reuters that Saudi Arabia and its main ally the United Arab Emirates would likely seek to remain deployed along the country’s Red Sea coast, where it is currently fighting an offensive against the Iran-aligned Houthi movement.

“Saudi Arabia and UAE are very worried about Iran’s influence, so they are seeking to keep some military presence on the Yemeni coasts even if the civil war ends,” said the official who asked not to be named due to the sensitivity of the matter.

In a response to a request for comment, the coalition denied the allegation.

“The coalition is working by all means to restore Yemen’s legitimacy so it can become stable and secure”, spokesman Colonel Turki al-Malki said in a statement.

“The Yemeni Republic will restore its role in protecting its lands and territorial waters, as well as contributing to the maintenance of regional and international security,” he added.

The kingdom and its mostly Gulf Arab allies intervened in a civil war in Yemen in 2015 to roll back the Houthis after they had pushed the government into Saudi exile.

Coalition and Yemeni forces have been making modest territorial gains in recent months against the group in an armed push moving northward from the Bab al-Mandab strait toward the Houthi-held port city of Hodeidah.

Yemen lies beside the southern mouth of the Red Sea, one of the most important trade routes in the world for oil tankers, which pass near Yemen’s shores while heading from the Middle East through the Suez Canal to Europe.