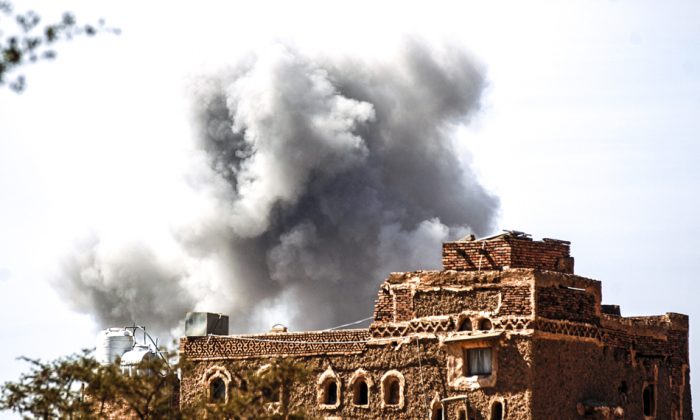 Smoke billows behind a building following a reported air strike by the Saudi-led coalition in the Yemeni capital Sanaa on Jan. 22, 2017. (MOHAMMED HUWAIS/AFP/Getty Images)
Middle East

RIYADH–A Saudi-led Sunni coalition air strike last week killed the top civilian leader in the armed Iran-backed Houthi Shiite rebel movement in Yemen, the Houthis reported on Monday. Saleh al-Samad is the most senior official to be killed by the Western-backed alliance in the three-year-old war.

Samad held the post of president in the Houthi-backed political body which runs most of northern Yemen.

Houthi leader Abdul Malik al-Houthi said in a televised statement that Samad was killed on Thursday in the port city of Hodeidah, on Yemen’s west coast, in several strikes which killed six others in his retinue.

“The forces of aggression, led by America and Saudi Arabia, bear the legal responsibility for this crime and all its consequences,” al-Houthi said.

There was no immediate coalition comment on the reports but Saudi broadcaster Al Arabiya TV said the alliance had killed Samad after a “precise monitoring” of his movements.

At the United Nations meanwhile, U.N. Secretary-General António Guterres strongly condemned air strikes on a wedding party in Yemen that killed at least 20 civilians on Sunday.

Saudi Arabia and its mostly Gulf Arab allies accuse the Houthis of being proxies of rival Iran – charges the Houthis and Tehran deny.

The Houthis control the capital Sanaa in the country’s north and are fighting forces loyal to the internationally-recognized Yemeni government based in the southern port city of Aden. The government is backed by a mostly Sunni Gulf Arab alliance which in turn receives arms and other support from the United States and Britain.

Samad was second on the coalition’s most wanted list of Houthi leaders, after al-Houthi. It had offered a $20 million reward for any information that led to Samad’s capture.

The death of Samad, the group’s Ansarullah political council chief, dealt one of the biggest blows yet to the Houthi in a war that has killed more than 10,000 people and unleashed the world’s most urgent humanitarian crisis.

Houthis TV network Al-Masirah reported that the Houthis had appointed Mahdi al-Mashat, once director of al-Houthi’s office, to replace Samad.

Residents and medical sources said coalition air strikes also killed at least 20 people attending a wedding in a village in northwestern Yemen on Sunday night, and about 30 people were wounded. The coalition said it would investigate the report.

The United Nations’ Guterres also called for a prompt and transparent investigation.

“The Secretary-General reminds all parties of their obligations under international humanitarian law concerning the protection of civilians and civilian infrastructure during armed conflicts,” a U.N. statement said.

The Saudi-led coalition intervened in Yemen’s civil war in 2015 against the Houthis who ousted the internationally recognized Yemeni government of President Abd-Rabbu Mansour Hadi. The Houthis now control the capital Sanaa.

Coalition air strikes have repeatedly hit schools, markets and hospitals, killing hundred of civilians, while trying to target Houthi forces during the three-year war. The coalition says it does not target civilians.

Three million Yemenis have been displaced by the conflict.

By Marwa Rashad and Sarah Dadouch