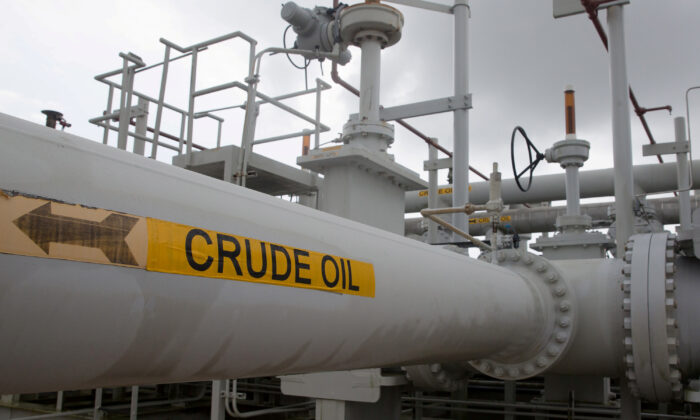 A maze of crude oil pipes and valves pictured during a tour by the Department of Energy at the Strategic Petroleum Reserve in Freeport, Texas, on June 9, 2016. (Reuters/Richard Carson)
Business

State-owned oil company Saudi Aramco said on Sunday it raised the size of its initial public offering (IPO) to a record $29.4 billion by way of a so-called “greenshoe option.”

Also known as overallotment, a greenshoe lets a company issue more shares when demand is high during an IPO.

After initial enthusiasm following its December IPO, Aramco shares have been trading relatively flat around the 35-riyal ($9.33) mark. Shares of the oil giant hit a low on Jan. 8 after Iran launched missiles against U.S. bases in Iraq following the killing of an Iranian military commander by an American drone strike.

Jason Tuvey, a senior emerging markets economist at Capital Economics, told Reuters that while geopolitical tensions were behind Aramco’s dip last week, cooling investor expectations regarding the firm’s prospects were causing shares to trend down.

The greenshoe, which released an additional 450 million shares, kicked Aramco’s valuation up to around $1.87 trillion.

“No additional shares are being offered into the market today and the stabilizing manager will not hold any shares in the company as a result of exercise of the over-allotment option,” Aramco said in a statement.

Brent crude oil futures, closely tied to supplies from the Middle East, spiked to over $70 per barrel on news of Iran’s missile strike, before plummeting in hours of trading to $65 per barrel, levels not seen since before the U.S. military strike that killed Iranian Gen. Qassem Soleimani.

At 431.1 million barrels, U.S. crude oil inventories are at the five-year average for this time of year, according to the Energy Information Administration (EIA). This does not include the U.S. Strategic Petroleum Reserve, which, at an authorized storage capacity of 713.5 million barrels, is the world’s largest supply of emergency crude oil.

“The strike caused a spike. It became clear reasonably early on that there was no evidence of loss of life and there were rumors that there had been a pre-warning of the strike, so the U.S. personnel had a chance to evacuate,” Johnson told The Epoch Times. “The Iranians were quick to point out that this was a one-off slap in the face for the U.S. and the markets calmed.”

“There are other factors at play, though,” he added. “With the U.S. development of shale oil, fracking and oil sands production, Iran only produces around 4 percent of the world’s oil production; capacity that could be fulfilled by other producers if Iran was completely offline or closed down. Hence their impact isn’t what it once was.”

October 2019 was the second month in a row that the United States was a net exporter of crude oil and petroleum products, exporting 389,000 barrels per day (bpd) more than it imports, according to data from the EIA.