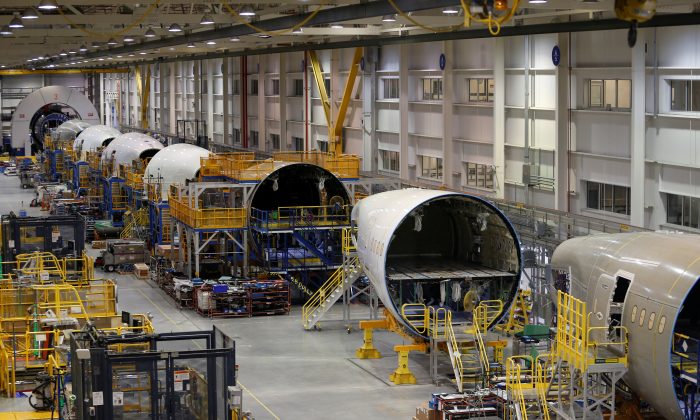 Saudi Arabia to Sign Memorandum With Boeing to Support Fleet

NEW YORK—Saudi Arabia will sign a non-binding agreement with Boeing for the U.S. plane maker to provide support and training to the kingdom’s fleet, the chairman of the state-owned military industrial company said on March 27.

With Saudi Arabia intending to localize 50 percent of its military industry by 2030, it is in discussions with U.S. companies to scale up their operations in the kingdom.

To that end, Ahmed Al Khateeb of Saudi Arabian Military Industries (SAMI) said it will sign a memorandum of understanding (MoU)—a document which outweighs a letter of intent but does commit either side to the agreement—with Boeing in Seattle.

“Hopefully we will be announcing other MoUs with other big American companies,” Khateeb told Reuters on the sidelines of the 2018 Saudi-U.S. CEO Forum in New York.

At the forum, Saudi Arabia’s U.S. embassy said the kingdom had signed 36 memorandums of understanding, totaling more than $20 billion in new business partnerships.

The memorandums of understanding included a partnership between Alphabet Inc’s Google and oil giant Saudi Aramco for national cloud services, and a cooperation agreement between Aramco and Raytheon for national cyber security services.

Aramco has been the victim of a high-profile cyber attack in the past, with former U.S. Defense Secretary Leon Panetta describing the 2012 so-called Shamoon attack as perhaps the most destructive cyber attack on a private business.

In addition to cultivating Western ties for investments in Saudi Arabia, the trip is an opportunity for the crown prince to try to reassure investors who were unnerved by the severity and secrecy of an anti-corruption crackdown last November.

CEO’s in attendance at the forum included Morgan Stanley’s James Gorman, Ajay Banga from Mastercard, and PepsiCo’s Indra Nooyi, according to an attendee list.