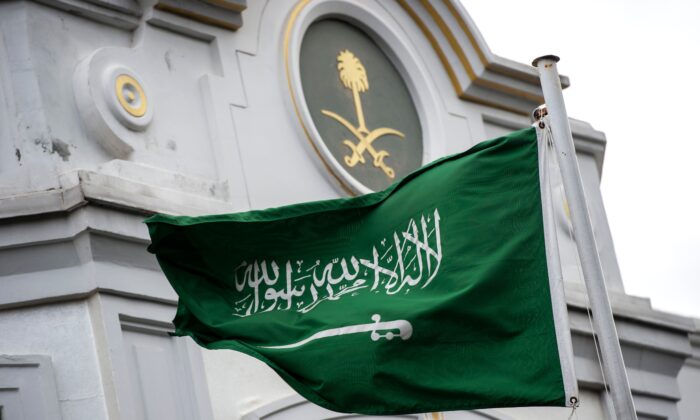 A Saudi Arabia flag flies in front of the Saudi consulate in Istanbul on Oct. 13, 2018. (Yasin Akgul/AFP via Getty Images)
Middle East

Dr. Walid bin Mohammed al Samaani, justice minister and president of the Supreme Judicial Council, issued an order to the courts in December 2019 that any marriage application for an individual under the age of 18 must be referred to a special court to ensure their safety and determine whether or not it is in their best interest, according to The National.

The move is in accordance with the Child Protection Law, which stipulates that “before the conclusion of the marriage contract, it is necessary to ensure that a person marrying under the age of 18 will not be harmed, whether male or female.”

It states that individuals who conclude marriage contracts that violate the rules will also be held accountable and will be referred to the ministry for necessary legal action.

Saudi Arabia has undergone a string of social reform initiatives aimed to modernize the kingdom and improve the rights of women and children since Mohammad Bin Salman became crown prince two years ago.

In 2019, King Salman oversaw the passage of new laws allowing women over the age of 21 to apply for a passport and leave the country without the permission of male guardians.

The amendments also eased long-standing social restrictions on women, granting them the right to register the birth of a child, a marriage, or a divorce, and to be eligible as a guardian to children who are minors.

In 2018, the Gulf nation allowed women to drive cars, and rules were altered meaning women no longer need permission from a male guardian to study at university, undergo surgery, or get a job.

As part of his ambitious reform agenda, the crown prince led an anti-corruption committee in 2017, arresting 11 princes and 38 other top figures in the kingdom, including ministers, military officers, and influential businessmen, in a crackdown on corruption.

More than 500 individuals, who had reportedly been living above the law, were eventually rounded up in a bid to tackle corruption, and to take back embezzled funds, the government said.

The Dec. 23, 2019, order comes after an amendment to the kingdom’s Child Protection Law was passed by the Shoura Council in January 2018, seeking to ban child marriages under the age of 15 entirely.

The ban, which was nearly a decade in the making, was praised by several members of the Shoura Council, including Latifa Al-Shaalan, who on Twitter in January 2019 called it a “good step forward that was not easy to reach.”

“You cannot expect a girl of 10 or 12 to understand what marital relations are or for her body to correctly carry a baby. There are a lot of health issues involved,” Shoura Council member Dr. Hoda Al-Helaissi remarked after the passage of the law in December 2019.

Children’s rights groups have long campaigned to end the generations-old custom of child marriage, which continues to be practiced across the globe from the Middle East to Latin America, South Asia to Europe.

According to Girls Not Brides, 12 million girls marry before the age of 18 every year due to factors including gender inequality, poverty, and tradition. A separate report by the United Nations suggests that a billion underage girls will marry by 2030.

In the United States, most states allow only individuals over the age of 18 to marry. However, some states make exceptions if minors have parental consent, the approval of a judge, or if they are recognized as adults, for example, if they are emancipated from their parents.

The Conversation reported that as of December 2017, minors of any age could legally marry in 25 states if they met their state’s exceptions.