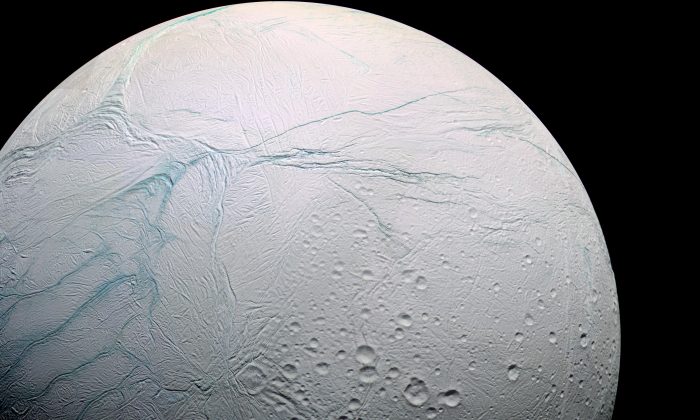 Saturn’s Moons May Be Younger Than the Dinosaurs—so Could Life Really Exist There?

Saturn is home to more than 60 moons—from the massive Titan and the crater-riddled Phoebe, to Enceladus with its geysers. Enceladus in particular has been put forward as a good candidate for harbouring microbial life, thanks to its warm internal ocean. After all, if intelligent life could evolve on Earth in a few billion years, why couldn’t at least some simple organisms exist elsewhere in our 4.5 billion-year-old solar system?

But now a new study, published in the Astrophysical Journal, has claimed that many of Saturn’s moons formed as recently as about 100m years ago—when dinosaurs still roamed the Earth. This challenges our understanding of the ages of moons in general and raises many new questions. How can we find out for sure? And could life still have evolved there in such a short time?

It has long been thought that nearly all of the major moons of our solar system’s giant planets were born from the cloud of gas and dust surrounding each planet as it grew. That would make them the same age as their host planet—4.5 billion years (the age of the solar system). However, these planets also have tiny moons that they acquired later, such as captured asteroids and comets in outer orbits, and chunks of debris from collisions in inner orbits.

But the new study now suggests that most of Saturn’s main moons are also young. The researchers deduced this from observations of the tidal relationships of Saturn’s principal moons. They found that if the medium-sized moons, such as Tethys, Dione, and Rhea, had existed for billions of years, they ought to have influenced each other’s orbits much more than they have.

Furthermore, the rate at which Enceladus is gaining energy (computed from its orbital changes and measured by the energy emitted at plumes) from tidal interactions with its neighbors suggests that the situation cannot have been like this for long. The researchers conclude that the maximum likely age for this part of Saturn’s moon family is no more than about 100 million years.

If they are right—and there are many scientists who would be skeptical of their modelling—this is a remarkable conclusion. It means that Saturn must have had a previous generation of moons that were destroyed by violent collisions to provide the debris from which the current moons—Mimas, Enceladus, Tethys, Rhea, and Dione—formed. This would also help to explain why Saturn’s rings are much more spectacular than the rings of Jupiter, Uranus, and Neptune—because they would be formed of icy debris supplied by this relatively recent catastrophe. Titan and its outer neighbors would appear to have survived this process, and could still date back billions of years.

Can we test this hypothesis? At present, lacking any laboratory samples, science has no way independent way to date the ages of distant moons. The best we can do is to assess the density of impact craters on their surfaces. The greater the crater density, the greater the duration of time over which that surface has been bombarded by debris. This makes it possible to assess the relative ages of the surfaces of the moons of each planet.

At Saturn, Enceladus has few craters, because it is being resurfaced by tidally-powered fracturing and icy eruptions. Mimas and Rhea (lacking such strong tidal heating) are more densely cratered. But because of the resurfacing of Enceladus, craters say nothing about the order in which the moons formed. The most densely-cratered region of a surface puts a lower limit on the age of each moon, but the trouble is that we don’t know the rate at which impacts have occurred, so we can’t turn this into a number measured in years.

If the researchers are right, it could be that Saturn just happens to have been the most recent victim of a moon-destroying (and re-forming) catastrophe. This should make us wonder whether the large moons of other giant planets, such as Jupiter and Uranus, really are as old as their planets. The origin of our own moon in some kind of giant impact well over 4 billion years ago, however, is fairly certain.

If Enceladus is indeed only about 100 million years old, this could be a blow to astrobiologists who have been touting it as the most likely place to find microbial life. The warm ocean beneath its icy shell seems like it should be habitable, but if Enceladus is so young would there have been enough time for life to have got started there?

I think it is still worth looking. Scientists have found hints that some kind of life could have existed on Earth 4.1 billion years ago—when the planet was very young. What’s more, if Enceladus really does date back only to the Cretaceous era and were found to have its own life already, then this would make life throughout the cosmos even more likely.

The Search Continues for Extraterrestrial Life, but Should It? (Part 1)

The Search Continues for Extraterrestrial Life, but Should It? (Part 2)

Hopefully, we won’t have to wait long for the answers. Last year, laboratory experiments suggested that chemical reactions between Enceladus’s internal ocean and its rocky core could provide enough energy to feed microbial life—and that molecular hydrogen from these reactions should be detectable in the planet’s plumes. This is something that the Cassini probe looked for in its flyby in October 2015—and the results could be in soon.