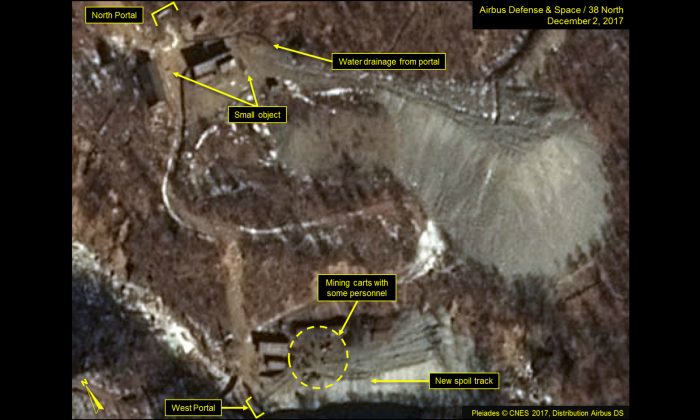 A Dec. 2, 2017 satellite view of part of the Punggye-ri Nuclear Test Site in North Korea reveals no notable changes at the North Portal but shows a significant expansion of the spoil pile at the West Portal. (Airbus Defense & Space/38 North, Pleiades CNES, 2017)
Asia & Pacific

North Korea appears be doing the ground work for another nuclear bomb test at its infamous Punggye-ri Nuclear Test Site, according to newly released satellite photos.

An analysis of recently taken commercial satellite imagery shows personnel and excavation work at the site, according to three experts working with 38 North, a website publishing expert information and commentary on North Korea.

The site has been in the news often over the years. It is the location of North Korea’s last five nuclear tests, the epicenter of shockwaves detected hundreds of miles away each time the Kim Jong Un regime detonates an underground nuclear explosion.

Those tests are believed to have unsettled the tectonic plates in the area, making further tests there dangerous due to geological instability. After North Korea’s most powerful nuclear test on Sept. 3, two significant aftershocks were detected.

A larger earthquake on Sept. 23 had a magnitude of 3.2. Around the time of that event, the Japanese broadcaster TV Asahi cited unnamed North Korean sources claiming a tunnel collapse had killed 100 North Koreans at the test site. During rescue operations, another collapse claimed another 100 workers, the outlet reported.

Which helps explain why tunnel work has shifted from the North Portal to the test site to the West Portal.

The most recent satellite images confirm what was observed by earlier images: While the North Portal is inactive, except for water draining from the portal entrance, the West Portal has nine mining carts, a quickly growing pile of spoil excavated from the underground facility, and new rails.

“Throughout December 2017, mining carts and personnel were consistently present around the West Portal and there was significant expansion of the spoil pile,” reads the analysis, conducted by Frank V. Pabian, Joseph S. Bermudez Jr. and Jack Liu.

The authors of the analysis say that one of the photographs taken on Dec. 28 reveal a large number of personnel (100 to 120) standing in seven formations in the support area nearby the West Portal.

While the analysis could not determine the role of the personnel information, it did note that it was unusual.

“It is rare to observe personnel in this area and the purpose of their activities is unknown.”

The South Portal area remains inactive, according to the analysis, with no significant activity observed there or anywhere else within the test complex.

A previous analysis of satellite photographs of the West Portal in November revealed earlier work on the site.

According to 38 North’s analysis then, the implications were clear.

“These activities suggest that tunnel excavation is underway at the West Portal, as the North Koreans expand the site’s potential for future nuclear testing,” reads the analysis.