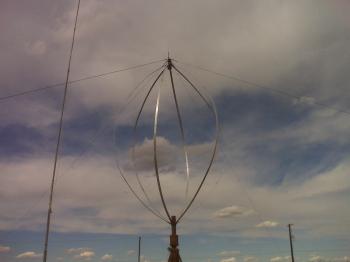 Glen Lux's new wind turbine can be built far cheaper and larger than existing designs. Previous vertical axis wind turbines had fewer blades and a central mast that extended to the top. (Courtesy Glen Lux)
US

Matthew Little
Matthew Little is a multi-media reporter for The Epoch Times.
View profile
Follow
biggersmaller
Print
It’s being described as a green energy breakthrough, the work of a retired Saskatchewan construction businessman known for his inventive streak and relentless work ethic.

Glen Lux is making national headlines for designing a wind turbine that costs less that anything currently on the market. Now, what was once a pleasant pastime could become big business if Lux can attract the dollars he needs to take his innovation to the next level.

Attracting investors is about to get easier though, thanks to a favourable analysis done by the National Research Council’s Institute for Aerospace Research which examined the design in detail and ran simulations based on designs of various sizes and materials.

“Everyone is congratulating me, they really like what I am doing,” said Lux of the friends and family who have been calling since his invention was unveiled over the weekend.

“They are surprised that it is as far as it is I guess. The ones that had heard about it thought I was miles away from doing anything and they were just surprised that I had the Institute of Aerospace Research involved with it, and that [researchers there] were as equally impressed with it as I was.”

Four years ago, Lux was picking up the broken pieces of an earlier prototype that flew apart when he forgot to turn it off before leaving for the day. Now he is basking in the national spotlight waiting for the detailed report from the aerospace institute that will show his design may be scalable to the size of the Empire State Building.

“I was pleasantly surprised,” said research officer Marko Yanishevsky about the results of the simulations the institute did when examining Lux’s turbine.

He said Lux’s design has significant innovations that give it great potential if he can do larger-scale field testing to definitively prove the design.

Those innovations make a once-failed type of wind turbine, known as a vertical turbine, financially feasible.

Lux, 59, went through 26 prototypes over eight years and invested more money than he cares to name to get his turbine to where it is today.

In the familiar wind turbines that presently dot many hillsides, the axis of the generator is turned horizontally by an airplane-like propeller. In contrast, vertical turbines turn the axle vertically and look like an egg beater with the handle stuck in the ground.

Vertical turbines have been all but abandoned, however, because of problems inherent in the design. The blades spend half their time turning against the wind, decreasing efficiency and making for a choppy spin which wears away at the structure of the turbine. Another problem is the central mast causes turbulence for the blades downwind, resulting in further stress.

Lux’s design adds additional blades for a smoother spin and replaces the central mast with a web of ultra-thin cables that keep the blades in place. That innovation is the real breakthrough, reducing cost and substantially cleaning up the airflow.

“It is a very inexpensive way of extracting power from wind,” said Lux.

The cheaper cost to build and operate the turbines makes them a potential breakthrough, if only Lux can attract investors to build a larger prototype with all the sensors necessary to fully analyze the design in the field where it will need to react to extreme temperatures. He also needs to sort out all the proper components to go along with it, including the generator, bearings, and the gearbox.

But Lux isn’t really that interested in getting into the business of marketing his invention and laughed when asked if he thought about going on Dragon’s Den, a popular CBC reality TV show where entrepreneurs pitch their ideas to venture capitalists.

“I really enjoyed doing this,” he said. “I love this stuff. It was more fun than work. Yeah it cost me money and it cost me time, but I just loved doing it.”

“I am not a marketing type of guy,” he added. “I like to invent things and experiment.”

Lux hasn’t done much in the way of promoting himself; some of his family didn’t even really know what he was up to. His aunt, reached by accident in an attempt to find Lux, said she was really surprised to see him in the paper.

Not wanting her own name in the paper, she said that her nephew has always been a very hard worker.

She thought anyone who doubted Lux or thought he was crazy for attempting what has stumped teams of engineers was obviously of the wrong opinion.

“He was determined. It worked,” she said succinctly.