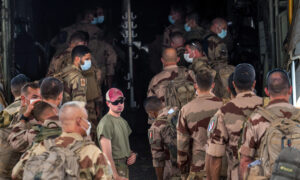 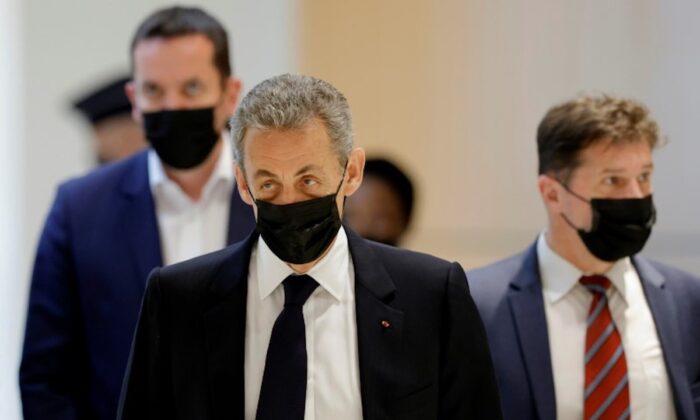 Former French President Nicolas Sarkozy arrives for a hearing in a trial over alleged illegal financing of his failed reelection campaign in 2012, with 13 other defendants, former officials of Bygmalion and representatives of the UMP, at the courthouse in Paris, France, on June 15, 2021. (Pascal Rossignol/Reuters)
Europe

PARIS—Former French president Nicolas Sarkozy denied wrongdoing on Tuesday at his trial over the illegal financing of his failed 2012 reelection campaign, saying its expenses were not his responsibility.

It had never been expected of his predecessors to scrutinize campaign bills, he told the Paris court. “Can you imagine me going into a meeting to discuss the cost of flags?” he said. “I wouldn’t have lasted two minutes. I had too much to do.”

The trial casts another ignominious pall over a political career that once saw Sarkozy bestride the national and global stage but later fall from grace when he was convicted in a separate case of trying to bribe a judge and peddle influence in order to obtain confidential information on a judicial inquiry.

A defiant Sarkozy said in court he had not been involved in the logistics of his campaign for a second term as president nor in how money was spent during the election run-up.

“Did I intend to commit a fraud, to do wrong? Was I careless? Negligent? My answer is the most formal no to all that,” he said. “From the moment I was told things were in order, I had no reason to give it more thought.”

Sarkozy, 66, said he was responsible for the political direction of his campaign but not the organization of rallies, production of campaign materials, and payment of bills.

In their indictment, prosecutors acknowledged their investigation had failed to prove Sarkozy either organized or was involved in illegal financing, but argued he had ignored warnings of an overspend from which he benefited.

“My responsibilities were political,” Sarkozy told the court. “Beyond that, I am known for delegating.

Sarkozy, who was president from 2007 to 2012, was at times precise on detail, and at other moments visibly indignant at the judges’ questions.

His testimony jarred with versions given to the court by Jean-Francois Cope, then general secretary of Sarkozy’s UMP party, and his chief of staff at the time, Jerome Lavrilleux, who without naming Sarkozy referred to a decision-making candidate aware of costs.

Lavrilleux, one of 13 co-accused, has previously acknowledged overseeing the rerouting of funds paid to the PR agency Bygmalion to camouflage costs.

“Was there a single moment when I ignored a warning or piece of advice? No!” Sarkozy said firmly, referring to his party’s former leaders and Bygmalion.

Sarkozy faces up to a year in jail and a fine of up to 3,750 euros if convicted.