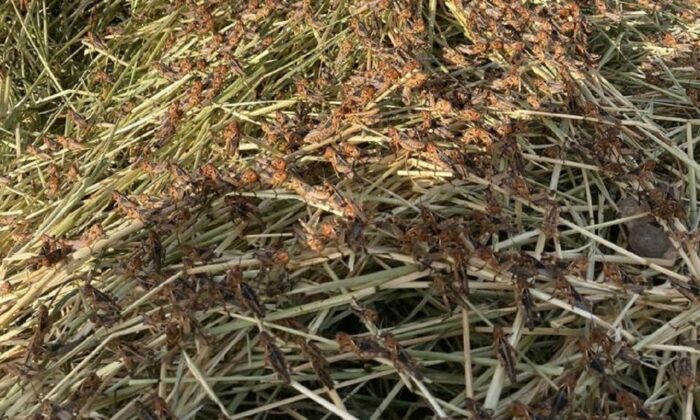 A swarm of locusts on a field on the island of Sardinia in Noragugume, Italy, on May 22, 2022. (Rita Tolu/Handout via Reuters)
Europe

MILAN—When farmer Rita Tolu saw “a big black wave storming across the horizon and taking over the fields” in April, she knew that little of her dried fodder and alfalfa crops would be left in the following days.

Tolu, 40, and other farmers working the central areas of the Italian island of Sardinia have seen swarms of billions of locusts ravage their land in the worst such invasion for more than three decades.

Tolu said that many of her colleagues “might have to shut down their businesses” as the plague of locusts adds to the impact of drought and rising fuel costs on farmers.

She and her family run a dairy farm of 200 hectares near the village of Noragugume, where crops and animal fodder such as ryegrass and clovers are also grown and around 1,000 sheep graze.

This year, Tolu was able to collect just 200 stacks of hay—against 1,000 in 2021, she said, with some of it harvested early as a precaution and losing some of its nutritional quality.

“Here people farm the land to avoid purchasing fodder and other animal feeds,” said Rita Zaru, the mayor of Noragugume, where over 70 percent of the around 280 inhabitants are employed in farming and shepherding.

Zaru said that anyone who had opted to farm grassland this year to boost milk production had lost the whole of their initial investment because of the locusts.

The problem is not new in Sardinia.

In 1946, about 1.5 million hectares of land, accounting for two-thirds of the island’s territory, were affected as locusts spread quickly across fields abandoned during World War Two.

Ignazio Floris, who teaches General and Applied Entomology at Sardinia’s Sassari University, said depopulation and uncultivated lands were once again one of the main reasons behind this kind of natural event.

Rising temperatures and lack of rain also play a big role as dry and compacted soil makes it easier for locusts to lay their eggs.

Floris noted that this year’s invasion has been affecting an area equal to 2–3 percent of the island, a swathe of territory that is much smaller compared to the 1946 catastrophe or 1988–89, when 81,000 hectares were hit.

The outlook is uncertain but Floris does not expect locusts to multiply as rapidly in 2023 in the light of planned remedies such as ploughing more fields and the deployment of a specific type of beetle that feeds on the locust’s eggs.

He also ruled out the locusts endemic in Sardinia “making the jump” to other parts of Italy, noting that their particular species—the Moroccan locust—differs from the Desert locust that has ravaged African countries and Lebanon in recent years.

According to Tolu, Sardinian farmers were ready to play a more important role in helping to fight the plague by ploughing more of their land.