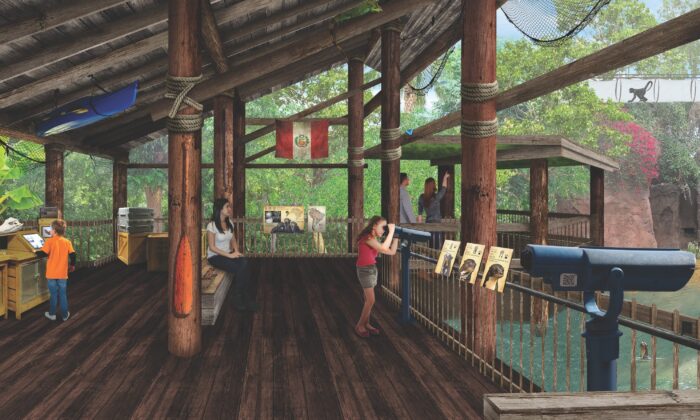 Rendering of a portion of the new Santa Ana Zoo expansion. (Courtesy of the City of Santa Ana)
Southern California

Big plans to expand and upgrade an aging Santa Ana Zoo are now underway thanks to a robust public–private partnership making the $60 million project possible.

Aimed at renovating the oldest areas of the 70-year-old zoo, the overall project will include sprucing up the property, improving existing animal habitats, and adding new exhibits and attractions.

The first phase of improvements will include a brand new above- and below-water river aquarium playground for endangered giant otters, including a 15-foot waterfall, with river’s edge and subterranean viewing areas for visitors.

Normally found in the rainforests of South America, freshwater giant otters are larger than the species of sea otters found off California’s coast.

New enclosed treetop and mesh monkey trails and an overhead habitat will also be built, allowing the zoo’s 40-plus monkeys of varying species to move freely above the otter habitat, giving visitors a unique view into their daily routines and feeding habits.

Once known as “Monkey Row,” the expanded area will allow visitors to see the animals from raised walkways eye-to-eye.

Zoo manager Ethan Fisher told The Epoch Times that the otter exhibit will replace what used to be a static lagoon, providing a more dynamic experience for both humans and animals.

“The renovations are going to completely change the lagoon area of the zoo,” Fisher said. “Once completed, the otter habitat will have a large glass wall for underwater viewing so guests will be able to see the otters swimming and feeding. Giant river otters are big, and they eat a lot of fish, so we anticipate it will become a popular attraction.”

Fisher said that the new construction will include several unique, interactive splash pad areas for children adjacent to the otter habitat, designed to mimic forest streams, rising mist, and fog.

“We’re working to create water features that immerse kids in an experience of what’s it’s like to walk through a rainforest like the Amazon,” Fisher said.

Meanwhile, new goat trails will be added to the zoo’s farm, and the landscaping and entrance areas will get a makeover. There are also plans for a temporary butterfly exhibit this spring and summer.

In addition, the state is providing funds for the zoo to build a new education facility to better accommodate school field trips. New restroom facilities, a garden trail, and picnic area have also been included in the plans.

Plans to break ground on the otter and monkey habitats in January had to be postponed due to supply shortages and contractor staffing issues; nevertheless, Fisher remains hopeful the projects will remain on track.

“The plan is to break ground [the week of Feb. 13], and we hope to have the first phase completed by summer 2023,” said Fisher.

The renovations will be key in helping the zoo reestablish its Association of Zoos & Aquariums accreditation, which it lost in 2017 due to outdated monkey enclosures deemed inconsistent with modern zoological practices.

Costs for the first phase expansion of the otter and primate habitats are estimated at $6.6 million, with $6 million coming from the city of Santa Ana and the remaining $600,000 from private donations and grants secured by the nonprofit organization Friends of Santa Ana Zoo. It’s the most complex project undertaken at the zoo to date, part of a 20-year master plan adopted by its board of directors in 2018.

The Santa Ana Zoo at Prentice Park or “SAZoo” as it’s often called, was established in 1952 as a public zoological garden by local resident Joseph Prentice, who donated 12.5 acres to the city of Santa Ana, creating Prentice Park.

Best known for its collection of monkeys, the 20-acre zoo is primarily focused on the plants and animals of Central and South America and is home to more than 250 animals representing upward of 75 species, some on the endangered list, including mountain lions and many exotic birds. The zoo’s Crean Family Farm is home to a large variety of barnyard animals and is a popular children’s petting zoo.

More than 250,000 people per year visit the Santa Ana Zoo, which is free for Santa Ana residents every third Sunday of the month.

Despite COVID-19 shutdowns, the zoo remained open more often than closed the past 23 months, largely due to individuals and families looking for outdoor activities.

“We were closed for six months, then reopened for three months, then closed five weeks and now we’ve been open for almost a year,” Fisher said.

Masks are not required to visit the zoo.

While most of the animals went about their daily business during the pandemic closures, Fisher said many of them missed the regular human interaction, for example the goats and other farm animals in the petting zoo.

“We certainly could see that some animals, like the monkeys and goats, were affected by less interaction during the shutdowns,” Fisher said. “When you think about it, animals really watch us as much as we watch them.”