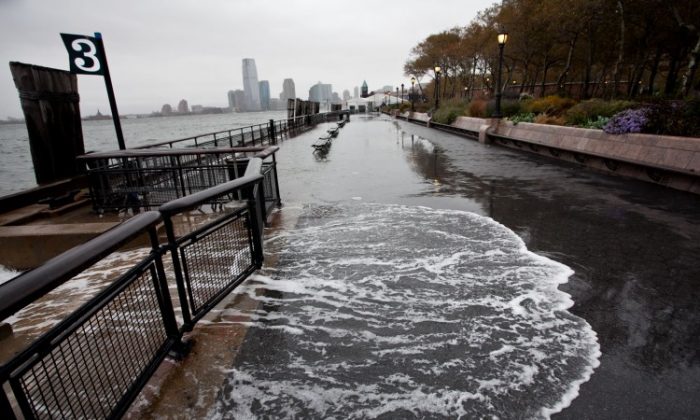 A view of Battery Park in New York in the morning of Oct. 29, before Hurricane Sandy hit. (Amal Chen/The Epoch Times)
News

Sandy Budget Burden to Fall on Next Mayor

NEW YORK—Among the many issues falling on the shoulders of the next mayor will be long-term recovery from Hurricane Sandy, as well as protection from the next storm.

The Bloomberg administration will leave the next mayor a blueprint of infrastructure suggestions that will be released in a report expected the final week of May or early June.

The report will be a gift. Funding for the blueprint, however, will not be part of the package.

Mayor Bloomberg’s executive budget, which must be approved by the City Council by June 30, includes $4.5 billion in federal aid for Hurricane Sandy recovery. Only $3 billion of that money is allocated for capital projects, which will be spread over three years.

“To put it in perspective, this year alone the city will spend more than $6 billion on employee health benefits. If we spend $6 billion on healthcare because city workers don’t pay any of their premiums, that is money we can’t spend on floodproofing, or any other kind of infrastructure investment.”

On Wednesday, Mayor Bloomberg said he expects the federal government to pick up the tab on whatever project the city decides to build, but said it would take years to implement.

“This is not the plan to fix everything today,” Bloomberg said about the yet-to-be-released proposals. “Really, this is just a discussion tool for the next administration.”

The federal government has approved an approximate aid amount, and Gov. Andrew Cuomo will be responsible for doling out the funds. New York state is expected to receive an estimated $30 billion, but much of the money is already spoken for.

Once the federal aid is gone, it is gone.

The Pinch of Debt Service

The city has borrowed money in recent years to fund capital projects such as building schools or fixing roads and bridges; however, the debt is putting an increasing pinch on the annual budget. Debt for fiscal year 2014 will top out at an estimated $6.2 billion and is expected to increase to $7.7 billion by 2017, according to a report by the Independent Budget Office.

“Although low interest rates over the past few years have enabled the city to borrow at lower-than-expected costs and refinance some existing debt to reduce future costs, debt service spending is projected to continue to rise because of the city’s many, and in some cases very costly, capital projects,” the IBO report said.

Gelinas said that, if there is a silver lining, it is that the city will not have to pay for repairs or protection for the MTA or any utilities, as they will receive their own federal money.