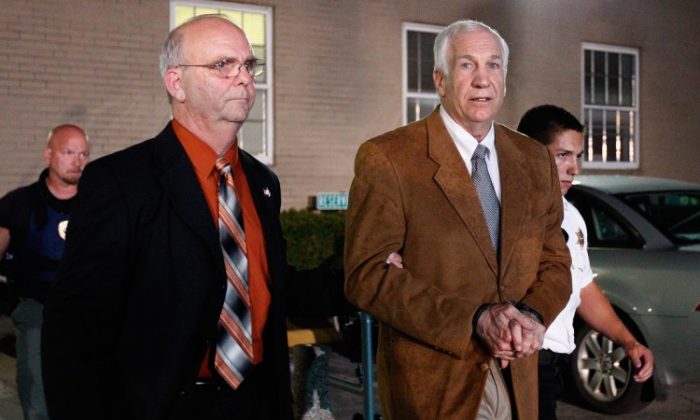 Former Penn State assistant football coach Jerry Sandusky leaves the Centre County Courthouse in handcuffs after a jury found him guilty in his sex abuse trial on June 22, 2012, in Bellefonte, Penn. The jury found Sandusky guilty on 45 of 48 counts in the sexual abuse trial of the former Penn State assistant football coach, who was charged with sexual abuse of 10 boys over a 15-year period. (Rob Carr/Getty Images)
US

Sandusky was convicted in October 2012, and Paterno allegedly had knowledge of the abuse Sandusky perpetrated. Paterno died of lung cancer last year after his resignation.

NBC aired excerpts of Ziegler’s interview with Sandusky on Monday, garnering criticism for prolonging the suffering of victims.

David Zirin, sports editor for The Nation, said on the Current’s “Viewpoint”: “It’s hard not to have the queasy feeling that in his [Sandusky’s] own mind, he is torturing them from his jail cell just by doing this interview and getting it out there.”

Sandusky dismissed the testimony of one of the witnesses, Mike McQueary, with a laugh. Sandusky told Ziegler from his jail cell: “I don’t understand how anybody would have walked into that locker room from where he was and heard sounds associated that was sex going on.”

NBC’s “Today” segment included excerpts from the documentary, an interview with Ziegler, and statements from Paterno’s family.

Ziegler told Matt Lauer on “Today”: “I’m trying to get Joe Paterno, effectively, his day in court… I have no doubt that Jerry Sandusky was guilty of many of things, if not all the things that he was accused of, but I do believe there were due process problems with the trial.”

Zirin felt an earlier interview NBC’s Bob Costas conducted with Sandusky before he was convicted was acceptable—Costas asked tough questions—but Zirin criticizes NBC for using a third-party interview conducted by Ziegler, “someone who espouses open sympathy for a convicted child rapist.”

A statement released by the Paterno family on March 25 states: “Sandusky had the opportunity to speak, under oath, during his trial and he chose not to do so. Releasing a recording at this time, nearly a year after he was found guilty on 45 counts, is transparently self-serving and yet another insult to the victims and anyone who cares about the truth in this tragic story.”

The family said, “Any attempt to use this recording as a defense of Joe Paterno is misguided and inappropriate.”