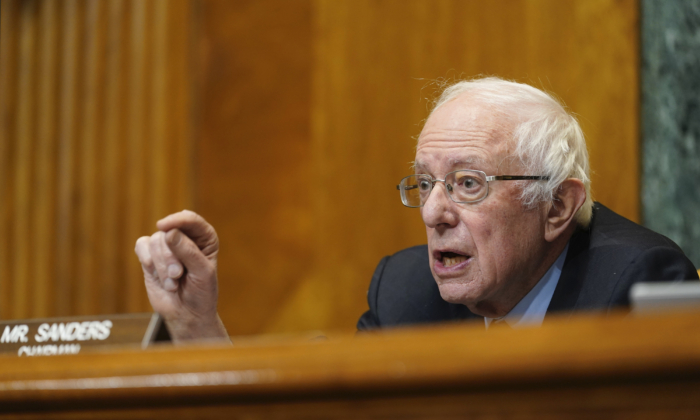 Sen. Bernie Sanders (I-Vt.) said on Monday that the Democrats should defy a ruling by the Senate parliamentarian and vowed to force a vote on to add the $15 minimum wage mandate back into the pandemic relief bill.

Senate Parliamentarian Elizabeth MacDonough had ruled last week that the $15 minimum wage provision could not be enacted through the budget reconciliation process, which the Democrats are using to push through the gargantuan $1.9 trillion relief package without the support of any Republicans.

“My personal view is that the idea that we have a Senate staffer, a high-ranking staffer, deciding whether 30 million Americans get a pay raise or not is nonsensical. We have got to make that decision, not a staffer who’s unelected, so my own view is that we should ignore the rulings, the decision of the parliamentarian,” democratic socialist Sanders said.

The budget reconciliation process is not subject to a Republican filibuster in the Senate, allowing the Democrats to push through measures with a simple majority. But whether the minimum wage mandate was eligible for reconciliation was always in question because the Senate rules limit what can be enacted using the process to measures that have a direct impact on the federal budget.

Sanders also called for the end of the legislative filibuster, a longstanding Senate rule which ensured bipartisanship.

“Given the enormous crises facing this country and the desperation of working families, we have got to as soon as possible end the filibuster,” Sanders said. “We cannot have a minority of members define what the American people want.”

Sanders said there will be a vote on the minimum wage.

“To the best of my knowledge, there will be a vote on the minimum wage, and we’ll see what happens,” Sanders said. “If we fail in this legislation, I will be back. We’re going to keep going.”

Sen. Joe Manchin (D-W.Va.) told reporters on Monday that he will never support ending the filibuster.

“Never! What don’t you understand about never,” Manchin said.

“We’re going to spend the next few days and weeks looking for the best path forward,” Psaki said.

The Congressional Budget Office has estimated that raising the federal minimum wage to $15 an hour would result in the loss of 1.3 million jobs. Republicans claim that only 9 percent of the funds in the pandemic relief package are targeted toward dealing with the CCP (Chinese Communist Party) virus, commonly known as the coronavirus.