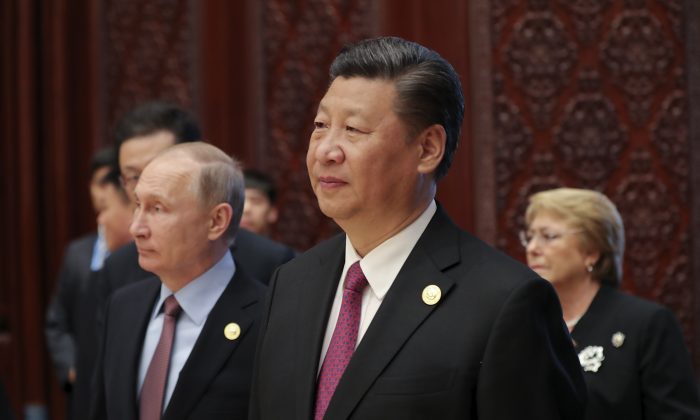 Chess is a metaphor—and even training—for war. It requires players to consider not just their own move, but their opponent’s—their “enemy’s”—countermove. Good players can anticipate moves—action and reaction—several steps ahead.

If there were good chess players on the Biden foreign policy team, they wouldn’t be considering involving the Society for Worldwide Interbank Financial Telecommunications (SWIFT) and banks in the sanctions they plan to implement against Russia if it invades Ukraine.

Knowing that China has proven itself an adversary, if not an outright enemy, of the United States, here’s how a good chess player might see the moves and countermoves of those sanctions playing out:

“We dramatically support Ukraine. We cannot have a Munich moment again,” he said.

Menendez’s allusion was to the 1938 Munich Agreement, by which Britain ceded Czechoslovakia to the Nazis if they promised to go no further. When Germany invaded Poland in September of the next year, it set off World War II. Today, making concessions to maintain peace, or appeasement, is considered a cardinal sin in foreign relations.

But foreign relations didn’t start with Chamberlain in 1938 and not all concessions to an enemy are appeasement; in fact, history is replete with wars being settled by the parties reverting to the status quo ante bellum, or the state of affairs as they existed before the war. (See, for example, the Treaty of Ghent, ending the War of 1812; the Korean War; the Iran–Iraq War, etc.)

Recall that prior to the 2014 Euromaidan Revolution, the leader of Ukraine was a Russian puppet, Viktor Yanukovych. He was an autocrat and corrupt, and the revolution arose after he rejected the European Union–Ukraine Association Agreement (EU–UAA) (pdf) in favor of a similar deal with Russia.

While Yanukovych was still in office, the United States was cheerleading—and arguably meddling in Ukrainian domestic politics—to encourage his overthrow. Victoria Nuland, the Obama State Department’s point person on Ukraine, spoke at a conference in December 2013, and admitted nudging—bullying?—Yanukovych and Ukraine to switch course and adopt the EU–UAA.

An undated recording believed to be of Nuland was leaked in which she wanted to “midwife” a new leader of Ukraine, Arseniy Yatseniuk, while shutting out other contenders. She wanted the United Nations and then-Vice President Joe Biden to bring about her vision. (Yatseniuk, or “Yats,” went on to become Ukraine’s prime minister.)

One has to question why there is such active, enthusiastic, and vociferous support to move Ukraine toward the EU among Nuland, Menendez, Secretary of State Antony Blinken, and others in the Democratic Party’s foreign policy establishment, as well as some Republicans. While these Ukraine hawks speak of democracy, freedom, sovereignty, and self-determination, universal values most Americans hold dear, as well as the far more nebulous notion of “international law,” none of them have presented any vital U.S. interest in the crisis.

Given the inconsistent enforcement of this lofty rhetoric by the Democrats of Foggy Bottom (China, much?), I’m inclined to assume other motives. (George Carlin, the late humorist and social commentator could have been speaking of me when he described a cynic as an idealist who’s been disappointed.)

Let’s ask Nuland, et al., how much influence Victor Pinchuk, a Ukrainian billionaire and founder of the Yalta European Strategy (YES), which seeks to bring Ukraine into the European Union (EU), has in guiding U.S.–Ukraine policy. He has given at least $13.1 million to the Clinton Foundation since 2006, according to The New York Times.

Similarly, billionaire currency trader George Soros, another Democratic Party mega-donor, and his International Renaissance Foundation have been pushing Ukraine into the EU for decades. (And who is better suited to benefit from the destruction of the U.S. dollar as the world’s reserve currency, under the scenario laid out above, than a veteran currency trader? Soros has been known in the past to profit handsomely by shorting the currencies of Western democracies.)

Whatever the motivation of the Democratic Ukraine hawks in Foggy Bottom, the Biden administration needs to beware the downside risk of enforcing these ill-considered sanctions. This isn’t checkers; it’s chess. In this instance, it’s best to recognize, sadly, the tragedy of Ukraine’s geography next to Russia and adopt Tartakower’s strategy: There’s nothing to do in the Ukraine crisis that will inure to the benefit of the United States or NATO.