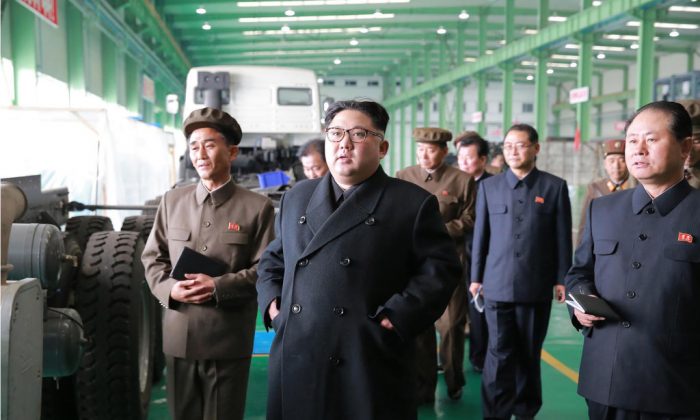 Sanctions currently crippling the North Korean economy could intensify if President Donald Trump succeeds in achieving one of the overarching goals of his current trip through several Asian countries.

Trump will urge the Chinese regime to go beyond fulfilling its U.N. Security Council resolution obligations with North Korea when he arrives there on Wednesday, Oct. 8. Reports that China is already ejecting North Korean workers ahead of a 120-day U.N. deadline indicate this could already be happening.

China’s cooperation with the sanctions is seen as critical to ensuring they have an impact.

North Korea—which has been considered very resilient to international trade sanctions—has complained bitterly about its reduced trade and capital flows.

KCNA, one of the regime’s official news agencies, reported on the regime’s efforts to appeal to the United Nations about the sanctions on Nov. 5.

The regime mouthpiece described the “brutal sanctions” as “genocide.”

Without naming a specific country, the regime said the sanctions were condemned by the international community because they threatened the “the enjoyment by the people of DPRK of their human rights in all sectors.”

The regime, which has been a recipient of foreign aid throughout its existence, complained that the sanctions had thwarted international humanitarian organizations active in the country.

According to North Korean defectors, however, aid to North Korea has given the regime more resources to pursue its Songun—“military first”—policy, which sees it prioritize military capability over any other international or domestic concern—including feeding its citizens.

Some defectors from North Korea have advocated that the only foreign aid that should be sent to North Korea is animal-grade feedstock.

“Feed you send for cattle and for horses and chickens is what gets to the North Korean people when you provide that support to North Korea,” defector Hye Sook Kim told a Canadian parliamentary committee in 2012. “You need something in your belly to survive, so I think food support is probably the most important, but we need to remember what kind of food actually reaches the North Koreans.”

Sanctions and a drought this past spring have caused North Korean food prices to dramatically fluctuate, spurring reports of increased bribe demands from North Korean officials as well as new taxes and tolls.

A U.S. State Department spokesperson said the Trump administration has brought pressure on the North Korean Regime “to unprecedented levels around the world.”

The result has been international cooperation on the sanctions, as well as diplomatic isolation, and expulsion of North Korean workers.

“Our goal for this pressure campaign … is to persuade the North Korean regime that the only way to achieve the stability it seeks is to abandon its current path and embrace meaningful dialogue about a different future,” said the State Department spokesperson.

More than 20 countries have restricted North Korean diplomatic activity while Mexico, Peru, Spain, Italy, and Kuwait have announced they will expel North Korea’s ambassadors. Portugal and the United Arab Emirates have suspended diplomatic relations and the Philippines and Taiwan have suspended all trade with North Korea.

“Other countries have recognized that U.N. sanctions are not enough and adopted additional autonomous measures—including the EU, Australia, ROK, Japan, and Latvia,” the State Department spokesperson said.