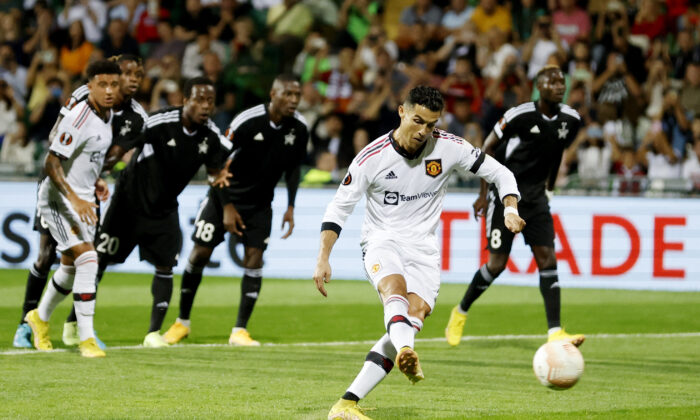 Jadon Sancho and Cristiano Ronaldo gave timely reminders of their value with both on target as Manchester United got their Europa League campaign back on track with a 2–0 victory at Moldovan side Sheriff Tiraspol on Sept. 15.

Dutch club Feyenoord also registered their first points in emphatic fashion, crushing Sturm Graz 6–0 in Group F where Lazio were hammered 5–1 away to Danish side Midtjylland.

Jose Mourinho’s AS Roma scored three times in the second half to beat 10-man HJK Helsinki 3–0 in Group C—Andrea Belotti scoring his first Roma goal to seal the win.

Former Champions League regulars Olympiakos’s hopes of progressing from Group G look slim, however, as they went down 3–0 at Bundesliga side Freiburg for whom Michael Gregoritsch grabbed a brace as they moved top.

United’s Premier League resurgence was interrupted by a lacklustre home defeat against Real Sociedad last week but they responded with a businesslike win in Chisinau where the match was played because of security concerns.

Sancho, surprisingly left out of England’s squad earlier on Thursday, slotted in United’s opener in the 17th minute after receiving a pass from Christian Eriksen.

Veteran Ronaldo, given a start by manager Erik ten Hag after being consigned to the bench in the opening weeks of the Premier League season, tucked away a 39th-minute penalty to claim his 699th club goal.

Sheriff, who downed Real Madrid in the Bernabeu in last season’s Champions League, offered an occasional threat but three-time European champions United were unruffled on their first ever trip to Moldova.

Sancho said it was “unfortunate” not to be selected for England’s Nations League games, but said: “I have to just keep focussing on myself and keep on working hard, week in and week out, that’s what I’ll do.”

Ander Guevara gave the Spaniards the lead but substitute Bruno levelled before Norwegian striker Alexander Sorloth struck the winner in the 80th minute.

Iranian forward Alireza Jahanbakhsh scored twice in Feyenoord’s romp against Sturm Graz to move top of their group on goal difference with each club having three points.

Lazio suffered a humiliating evening at Midtjylland for whom Paulinho opened the scoring and Sory Kaba, Evander, Gustav Isaksen and Erik Sviatchenko were all on target.

It could have been even worse for the Italians with Midtjylland also missing a penalty.

In Group H, Ferencvaros moved top with six points thanks to a 1–0 home win over Monaco while former European champions Red Star Belgrade went down 2–1 at Trabzonspor and remain without a point after two games.

Real Betis top Group C with six points after a 3–2 win over Bulgarian side Ludogorets—a win notable for the fact that their second goal was scored by 41-year-old Brazilian Joaquin who becomes the oldest player to score in the Europa League.

French club Rennes were denied their 100% record in Group B after Turkish club Fenerbahce struck deep in stoppage time for a 2–2 draw having trailed 2–0.

Ukraine’s Dynamo Kiev prop up Group B with no points after losing 1–0 to AEK Larnaca in a match played in Krakow because of the security situation in Kiev.

Norwegians Bodo Glimt beat Zurich 2–1 to lead Group A with four points while Arsenal’s match against PSV Eindhoven was postponed because of arrangements for Queen Elizabeth’s funeral.