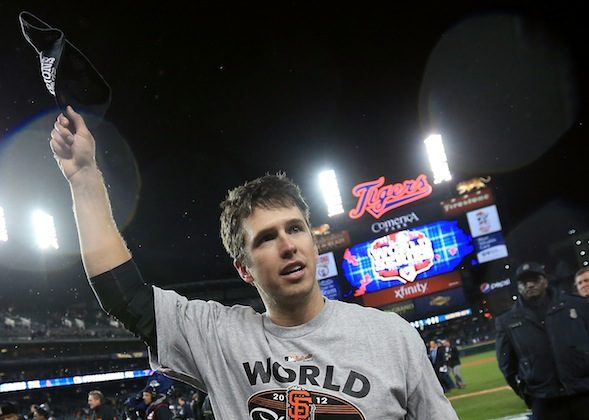 The San Francisco Giants finished their four-game sweep of Detroit with a 10-inning 4-3 win over the Tigers in Detroit late Sunday night.

The World Series title is the second in three years for the Giants and seventh in franchise history.

Matt Cain went seven innings in the finale for San Francisco, allowing three runs including a solo home run to Miguel Cabrera. The homer was Cabrera’s first extra-base hit of the series.

Cain was matched by Tigers starter Max Scherzer who went six and a third innings, also allowing three runs while striking out eight.

The game tilted in the sixth.

Clinging to a 2-1 lead, Scherzer allowed a leadoff single to Marco Scutaro and then a two-run home run to Buster Posey to put the Giants back on top 3-2. In the bottom half of the frame, Tigers designated hitter Delmon Young tied the game with a solo shot.

The game stayed that way until the top of the 10th when Scutaro singled home DH Ryan Theriot. Giants closer Sergio Romo clinched the series by striking out the side in the 10th, including the triple crown winner Cabrera who was the final out.

Pablo Sandoval was named series MVP after his three home runs in Game 1.