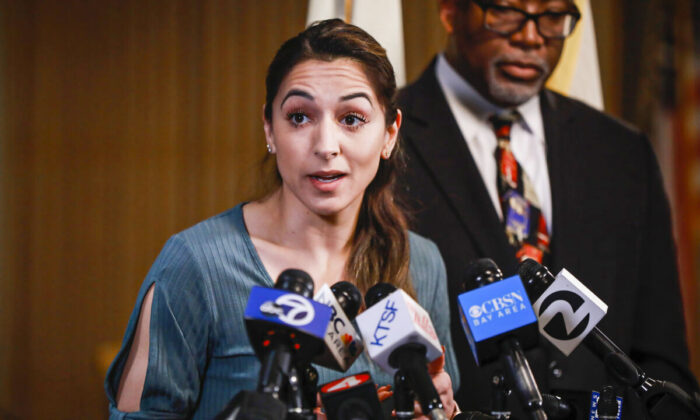 Following an overwhelming defeat in this week’s recall battle, the president of San Francisco Board of Education claimed that her ouster was the consequence of “fighting for racial justice,” and that those who voted “yes” are aligned with “white supremacists.”

None of the three board members challenged in the recall won support to continue in their position. Board President Gabriela López, Vice President Faauuga Moliga, and Commissioner Alison Collins all lost their positions by margins of nearly 3 to 1, according to San Francisco’s elections department.

“So, if you fight for racial justice, this is the consequence,” López wrote to Twitter on Thursday. “Don’t be mistaken, white supremacists are enjoying this. And the support of the recall is aligned with this.”

López posted a screenshot of a report about the landslide recall by The Washington Post, which was titled, “San Francisco recalls school board members seen as too focused on racial justice.” The article describes the recall effort as “a move fueled by a failure to reopen schools last year and unpopular actions aimed at advancing racial justice.”

“In a warning for the left, critics saw misplaced priorities, as the board focused on equity issues while schools remained closed,” the article’s subheading reads.

In response to López’s post, Washington Post political reporter David Weigel commented that her “white supremacist” complaint doesn’t actually hold up, pointing out that supporters of the recall movement were “racially diverse.”

“The ‘yes’ vote for recall was racially diverse, including hundreds of non-citizen immigrants who were eligible to participate,” Weigel wrote on Twitter. “The ‘white supremacist’ charge just didn’t convince anyone.”

The recall campaign was spearheaded by Autumn Looijen and Siva Raj, two single parents with children at public schools in the city. Their website highlighted the top reasons they believed a change in the school board leadership was necessary, including the lack of a plan to address losses to learning caused by school closures, poor management that allowed the district’s budget deficit to double to roughly $125 million, as well as controversies surrounding Commissioner Collins.

“Our schools wasted time renaming schools instead of reopening them,” the website states.

Citing alleged connections to racism, sexism, and other injustices in history, the board last year approved the renaming of 44 schools named after prominent historical figures, such as George Washington and Abraham Lincoln, only to put the plan on hold because of widespread criticism.

Meanwhile, Collins lost her title of vice president in March 2021 because of resurfaced Twitter posts, in which she accused the Asian American community of not doing enough to help deny a presidency for Donald Trump. She refused to resign and instead, filed a lawsuit against the school district for $87 million in damage.

San Francisco Mayor London Breed, who previously expressed frustration over the school district’s misplaced priorities, will now need to appoint three new members to the board.

“The voters of this city have delivered a clear message that the school board must focus on the essentials of delivering a well-run school system above all else,” Breed said in a prepared statement following the recall. “San Francisco is a city that believes in the value of big ideas, but those ideas must be built on the foundation of a government that does the essentials well.”