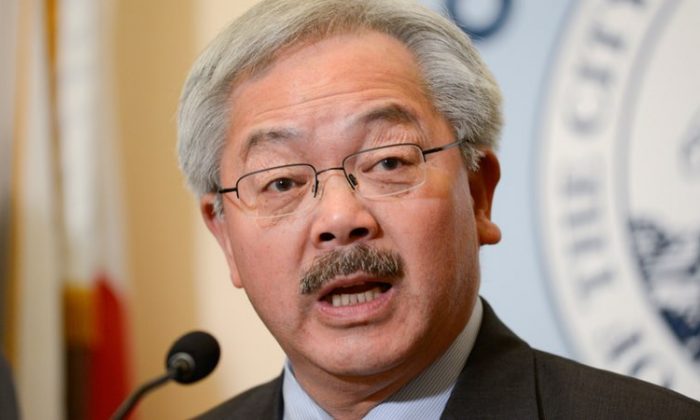 San Francisco Mayor Ed Lee, the city’s first mayor of Chinese descent, died early on Tuesday, the mayor’s office said in a statement that did not cite the cause of death.

Lee, 65, died at Zuckerberg San Francisco General Hospital, with family and friends at his side about 1:11 a.m. local time.

“It is with profound sadness and terrible grief that we confirm that Mayor Edwin M. Lee passed away,” the statement said. “Our thoughts and prayers are with his wife Anita, his two daughters, Brianna and Tania, and his family.”

In 2011, Lee was elected the 43rd mayor of San Francisco and the first elected mayor of Chinese descent in a city steeped in Chinese American history. He was appointed by the board of supervisors, won his first full term later that year, and was re-elected in 2015.

Full statement from the Mayor's office on the passing of San Francisco Mayor Ed Lee. @CBSSF is on-air now with full coverage. pic.twitter.com/6PEgasvFVf

Lee was born on May 5, 1952 in Seattle to immigrant parents from China. He graduated from Bowdoin College in Brunswick, Maine, in 1974 and from Boalt Hall School of Law at the University of California, Berkeley, in 1978, according to the mayor’s website.

Lee was the fourth of six children and grew up in housing projects, according to reports from the San Francisco Chronicle. He became head of the city’s Human Rights Committee in 1991 after a career as a civil rights attorney, during which he often filed litigation against San Francisco.

As a law student, Lee represented residents of a public housing complex who sued San Francisco over unsafe and unsanitary conditions in the first tenants’ rent strike against the city’s housing authority, according to the Chronicle report.

With Lee’s passing, Board of Supervisors President London Breed becomes the acting mayor of the city of more than 850,000 people, according to the mayor’s office.

Board of Supervisors President London Breed will be sworn in as San Francisco’s mayor, following Ed Lee’s death early this morning.