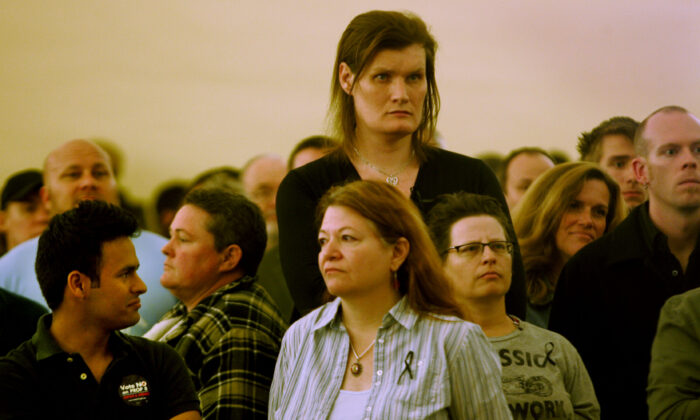 In this file photo, members of the community listen to speakers during a rally at the San Diego Lesbian Gay Bisexual Transgender Community Center in San Diego on November 5, 2008. (Sandy Huffaker/Getty Images)
Southern California

San Diego County supervisors voted 3–2 on April 26 in favor of creating an ordinance that redefines the word “women” to include biological males who identify as women, despite an overwhelming show of opposition from the public.

The supervisors approved the first reading of the local ordinance, which would be based on the U.N.’s Convention on the Elimination of All Forms of Discrimination Against Women, a human rights treaty penned 40 years ago.

However, county officials have revised the original treaty by including biological males who identify as female.

“I want to make sure that we emphasize that in this ordinance, it’s very clear that women and girls refer to those who identify as women and girls, including transgender women, gender non-conforming, and those assigned female at birth, who include non-binary, transgender men, and intersex communities,” Supervisor Nora Vargas said during the meeting.

The ordinance, which would only apply to county departments and programs, claims to address employment barriers and discrimination in the legal system, help educate women about their voting rights, and combat gender-based violence and harassment, according to its text.

Supervisor Joel Anderson, who voted against the motion, called the ordinance “aggressive” and said it would move women’s equality in the wrong direction.

Anderson said he is worried about the ordinance’s implication on Title IX, the federal civil rights law that prohibits sex-based discrimination in government-funded education institutes.

“I’m also worried that in the wrong hands, this may weaponize [women’s rights], where we should be coming together, but it may be used to purge people or to go after folks,” Anderson said.

Supervisor Jim Desmond, who also voted against the ordinance, said a new definition of “women” would give males who identify as female an “open door” to take away opportunities for women in sports and academia.

“In my opinion, it’s taking away from biological women,” Desmond said. “And that in itself I think is discriminatory towards women.”

Those who spoke in favor were county employees and those from nonprofits for women and girls, as well as other organizations like Planned Parenthood.

“Planned Parenthood … urges your support in order to move our region closer to achieving gender equity and removing the barriers faced by so many women and girls, including women of color, and those who identify as transgender, non-binary, and gender non-conforming,” Vernita Gutierrez, who spoke on behalf the organization’s Pacific Southwest division, said during the meeting.

San Diego resident Brittany Maher said the intent of the 1979 U.N. international human rights treaty was about equality for women rather than today’s push for “equity.”

“This radically redefines men as women and boys as girls,” Maher said during the meeting. “This is a dangerous play against [the United Nations treaty] and science, and it will have massive implications on women and girls in San Diego by changing the historic and scientific definition to include men, and now force women to seek shelter with men, to lose women’s scholarships to men, to lose women’s jobs to men, to compete in collegiate women’s sports with men, and to even be jailed with men.”

County supervisors will take up the issue again next month.