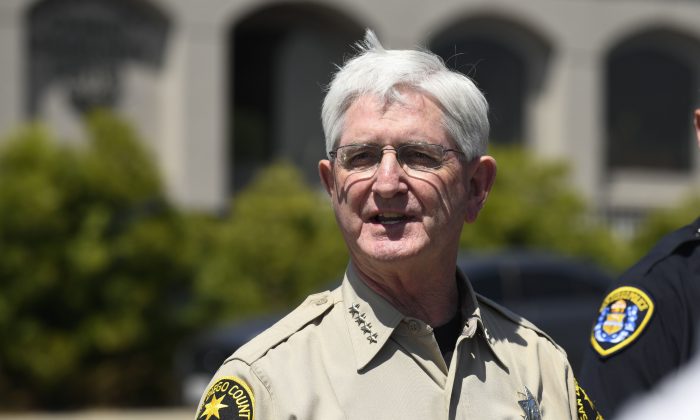 SAN DIEGO—Bill Gore, who has served as San Diego County sheriff for more than a dozen years, announced on Jan. 19 that he plans to retire next month, nearly a year before the end of his fourth term in the post.

Gore, 74, who announced last summer that he would not seek re-election this year, said he will step down on Feb. 3.

The career lawman did not provide a reason for his early departure, though he did say in a prepared statement that his retirement would allow him to give his “full attention and support” to his wife “as she has done for me during our 43 years of marriage.”

A 52-year law enforcement veteran, Gore was appointed sheriff in 2009 by the San Diego County Board of Supervisors and subsequently elected to the position three times. His current term ends next January.

In his statement, Gore described his time as sheriff as “one of the most rewarding experiences of my law enforcement career.”

“I will always be grateful to the residents of this county for their continued confidence and support during my tenure,” he wrote. “It has also been my honor to have had the daily support from the extraordinary men and women of this department who sacrifice every day for the citizens of San Diego County.”

Gore joined the agency in 2004, serving as assistant sheriff of its Law Enforcement Services Bureau before being appointed undersheriff by then-Sheriff Bill Kolender in December 2005.

Upon the midterm retirement of Kolender 13 years ago, county supervisors unanimously appointed Gore to serve out the remainder of the four-year post. Gore was elected sheriff in 2010, and re-elected in 2014 and 2018.

Prior to joining the sheriff’s department, Gore spent 32 years with the Federal Bureau of Investigation, where he rose to the level of assistant director and served as special agent in charge of its San Diego and Seattle field divisions.

Following his retirement from the federal agency, he worked for a year as chief investigator and special advisor to newly elected San Diego County District Attorney Bonnie Dumanis.

It was not immediately clear who will take over the regional law enforcement agency following Gore’s early departure. On Wednesday afternoon, Nathan Fletcher, chairman of the Board of Supervisors, announced that he will call a special meeting of the panel in March to consider an interim-sheriff appointment.

In a prepared statement, Fletcher said he would not support the nomination of anyone running for sheriff as a candidate to be the interim holder of the post.

“The voters are poised to make a very consequential decision on who they want to be our next sheriff, and it would be inappropriate for us to put our thumb on the scale this close to the election by appointing a person who is a candidate for sheriff,” Fletcher said.