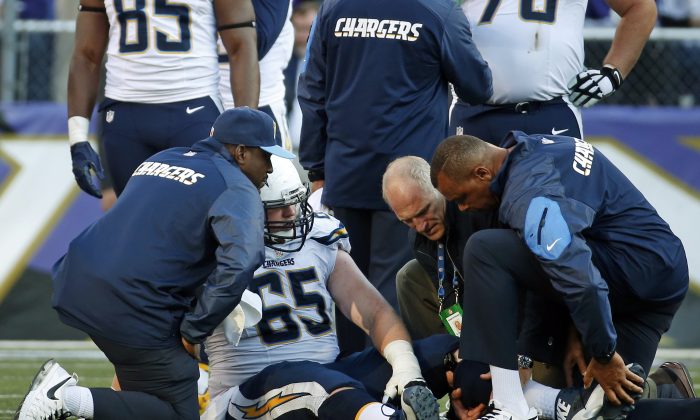 San Diego Chargers center Chris Watt (65) is tended to after a play in the second half of an NFL football game against the Baltimore Ravens, Sunday, Nov. 30, 2014, in Baltimore. (AP Photo/Alex Brandon)
NFL

The San Diego Chargers are preparing to play the New England Patriots on Sunday night as the news and rumors ramp up.

The Chargers offensive line could get a boost with the return of right tackle D.J. Fluker and/or center Chris Watt.

Watt suffered a calf strain. If he does start, it would enable the Chargers to start their fifth different center–Trevor Robinson–this season.

Fluker suffered a concussion in practice on Wednesday.

Both players practiced on Friday.

They’re both listed as questionable.

D’Alessandris said that Watt and the other fill-ins have earned Philip Rivers’ trust, and have learned the offense well.

Safety Eric Weddle and the rest of the secondary will challenge Patriots quarterback Tom Brady. The Chargers defense is ranked eighth in total yards allowed and seventh in passing yards allowed.

“The secondary is really solid. Eric Weddle is one of the best safeties in the league,” Brady told the Providence Journal.

“He’s just free all the time, finds the ball. He’s a really smart player. You can see how he really brings that whole defense together. They have a lot of good players. They’re 8-4. They’ve had a great season. They went on the road in Baltimore and beat a really good team on the road, which is tough to do. That’s what we’re going to need to be able to do.”

The wide receivers are also aware of the Chargers’ defensive prowess.

“He’s definitely a leader on the back end of their defense,” Tim Wright said of Weddle.

“I guess they give him a lot of rein to fly around and play everywhere on the ball. He’s a great player. We definitely have to keep our eyes on him when we’re preparing for him and definitely out there on Sunday. He definitely gives them the versatility to their defense that we have to keep [an eye] on.”

“I think we’ve had a number of guys step up throughout the year. The most important thing is that you continue to get better week in and week out,” Chargers head coach Mike McCoy said. “I think the way Eric Weddle on the back end has led the defense — his leadership leading those guys, getting everybody going, getting everyone on the same page week to week. We’ve got to play our best game this week.”

Fantasy football players are considering whether to play Philip Rivers or not, and there are different opinions.

SB Nation notes the Patriots have one of the best defenses in the league, although they’ve slipped in the past weeks.

“He is at home, but Rivers is not in the QB1 neighborhood this week,” it said.

“The last time he went against a good defense, the Miami Dolphins held him to negative fantasy points in Week 9. No thanks.”

“I definitely see this SD vs NE match up being a shoot out for Philip Rivers and Tom Brady,” said one.

“I am a die hard Patriots fan too, however I never allow my fandom to cloud my fantasy management judgement.”

Patriots tight end Rob Gronkowski has made news before New England’s game with the Chargers.

San Diego’s task is limiting his impact on Sunday night.

“It’s going to be a huge challenge for us,” Chargers safety Eric Weddle said. “But we are up to it.”

Keeping pace with Gronkowski is a chore this week. With the Patriots practicing in San Diego, he’s been spotted at area nightclubs and hanging with singer Justin Bieber at a Los Angeles Clippers game.

It’s doubtful Gronkowski, who leads the Patriots with nine touchdown catches and 910 yards receiving, will slow down on Sunday.

“Pray a lot,” defensive coordinator John Pagano said. “He is one of the best tight ends in the league.”

With the Chargers’ eight-time Pro Bowler Antonio Gates, Sunday’s game features two of the top players at their position.

“If you were a fan it would be fun to watch,” Chargers offensive coordinator Frank Reich said.

“He runs great routes and he’s a big, pure athlete,” Pagano said of Gronkowski. “And he knows what to do at the top of the routes. He knows how to finish them. You watch him on film and he runs through defensive backs trying to be as physical and big as him. He is one of the best tight ends in the league and he shows it every week.”

“He is one of the best to play,” he said. “You can’t go up high on him. He is too hard to tackle because he’s too physical, too big.”