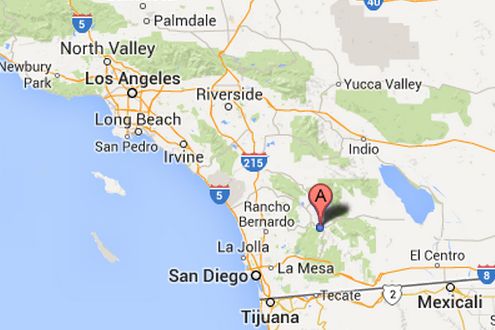 Julian, Calif., near where a single-engine plane crashed in the mountains, killing two people on the night of Wednesday, Oct. 9, 2013. (Google Maps)
US

Thursday morning, authorities found the single-engine plane that had crashed overnight in the Mountains near Julian, Calif., east of San Diego. The man and woman aboard were both killed. Their identities have not been released.

There were gusty winds in the area at the time of the crash.

The Piper Mooney aircraft was lost on radar shortly after 6 p.m., reports the Los Angeles Times. It was en route from Palm Springs to San Diego when it crashed.

Rain and wind had hindered the search, preventing the use of helicopters, but a ground team found the wreckage at about 1 a.m. in the Volcan Mountain Wilderness Preserve.