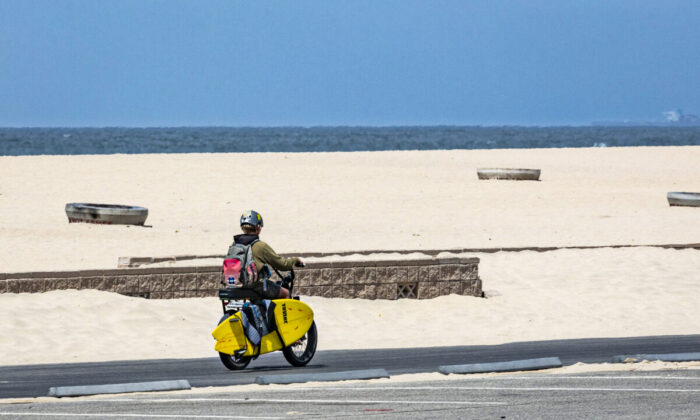 A boy rides an e-bike with his surfboard along the beach in Huntington Beach, Calif., on May 20, 2021. (John Fredricks/The Epoch Times)
Southern California

SAN CLEMENTE, Calif.—After nearly 370 comments from concerned citizens were recorded, the San Clemente City Council moved forward Dec. 21 to ban the use of bicycles and electric bicycles (e-bikes) along the beach, pier, and all trails within the city.

“It’s dangerous, problematic, and of concern,” Councilman Steve Knoblock said during the meeting. “I have no problem supporting a prohibition on e-bikes on the beach trail.”

Ten months ago, the city council approved the Beaches, Parks & Recreation Commission’s recommendation to “prohibit all bicycles on all turf within the city parks,” according to the agenda report.

However, electric cyclists could continue riding along the beach trail at or under the established speed limit of 10 mph.

The council also directed staff to develop a film and education course concerning e-bike safety for all e-bike users while trekking along city terrain and traffic.

Moreover, the council directed staff to establish an “E-bike Web Portal/Hotline” for residents to report incidents or experiences relating to e-bikes while using city amenities or public spaces and return with the collection of data back to the city council after six months.

In many cases, the portal indicates e-bike users—primarily riders under 18 years old—disregarding stop signs, riding against the flow of traffic, and crashing into pedestrians and vehicles.

“We saw that ring very loudly,” Samantha Wylie, the city’s recreation manager, said during the meeting.

Last year, Councilwoman Kathy Ward, who was mayor at the time, voted to test the use of e-bikes on the Beach Trail only during the winter. However, she pulled back her position on the matter.

She said the blind curves put pedestrians in harm’s way against fast-approaching e-bikes.

“It’s an accident waiting to happen,” she said.

The reporting portal gathered data from March to December of this year and focused on six areas: Beach, Parks, Sidewalks, Streets, Trails, and Other.

According to the city’s agenda report, nearly 90 percent of these reports were directed toward the beach and beach trails.

“They are a public nuisance and a safety hazard,” Al Cullen, resident, said during public comments. “We need some enforcement so that we don’t have further fatalities in this city.”

Cullen also suggested the city require license plates for e-bikes, citing that when a violation occurs, authorities could easily track down the offender.

“We don’t know who these individuals were that were involved in any of these incidents,” Duncan said during the meeting.

The city council voted to prohibit walking, pushing, and parking bicycles and e-bikes on the pier and to increase bicycles racks at the pier’s entrance.

Council will come back for a vote on an updated ordinance of the bike and e-bike ban at a future meeting.